One of the biggest Lottery breakthroughs in recent years came when Steve Player applied the concept of progressive wagering to Lottery games. This was a field pioneered entirely by the Master Numbers Man, and it served to expand the horizons of systems players everywhere. This concept allows a player to protect his investment by being assured of a profit and a full return of all the money he or she has wagered during a predetermined insured period. Secondly, through the use of compound progressive systems, a player is no longer limited to winning small prizes. Compound progressive systems can bring the value of a single hit in the Pick-3 game up from the usual $500.00 level to as much as $5,000.00 or more for a single hit while at the same time insuring that you will get back every penny which you invested as long as you hit during the insured period. Does this sound exciting? Judging from the mail we have received from countless players using the new Steve Player systems with progressive wagering insurance to win between $50,000.00 and $100,000.00 a year, we would say it's very exciting!!! What follows is an explanation of this concept in Steve's own words.

Progressive wagering gives you the ultimate edge in your Lottery play by affording you total control over, and insured protection of, every dollar you invest into the games. Allow me to present a very basic progressive wagering schedule as an example. This particular schedule is for playing boxed (any order) No Match numbers in the Pick-3 game. No Match numbers are those which contain three different digits such as 123 or 904. When playing No Match numbers in boxed (any order) form, each bet costs $1.00 and the average national payoff for a hit is $80.00. There are a total of 120 possible No Match numbers in the Pick-3 game. If you were to cover them all, you would be assured of winning as long as the number drawn that day was a No Match, but you would also lose $40.00 in the process! If you were to play 10 different No Match numbers each day, you could play for exactly eight days before you end up in the red. After those eight days you would have invested a total of $80.00 for a total return of $80.00. You would make money if you were to hit anytime during the first seven days, and a hit on the eighth day would allow you to break even. After that, you would be working with a deficit that would grow larger each day, and even if you hit, you would only get back some of the money which you put into the game. This sounds like a pretty bad deal, but that's how most people approach the Daily Numbers games; by chasing after lost money, hoping to at least get back some of what they have put in. This is the WRONG way to play, and don't let anyone convince you otherwise. This scenario is pure desperation, and it is not the way a seasoned systems player should think. 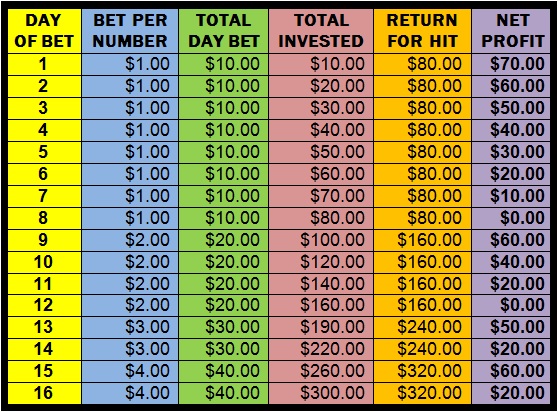 Okay, now let's take a look at what we have accomplished. We have played the same amount of numbers (10 No Match Numbers) each day, only this time we have allowed ourselves to stay in the game for a total period of 16 days. This is the insured period, and it is twice as long as we could have gone without using this system. We have also assured ourselves a profit or at least a break-even situation if we win anytime during the 16 day insured period. By playing 10 No Match numbers each day, we have played a total of 160 No Match numbers during our sixteen day insured period. Guess what? Since there are only 120 possible No Match numbers in the game, we have essentially covered the entire field plus 40 additional numbers. If we do not hit during this sixteen day period, then there is something seriously wrong with the way we are picking our numbers. We cannot blame the progressive schedule on that. It only guaranteed to cover our bets for 16 days, covering a total of 160 No Match numbers, and it did just that. Take a look at the chart above. It illustrates the 16 insured days of this sample progressive schedule, indicating our daily BET PER NUMBER, TOTAL DAILY BET, our TOTAL INVESTED, our RETURN FOR HIT and our NET PROFIT for each of the 16 days during the insured period.

As you can see from this table, you cannot lose money with this wagering schedule as long as you successfully hit at least one winning No Match number during the 16 day insured period. You may be thinking that the returns are not very large, especially in light of the fact that you need a $300.00 bankroll to play this system. That's true, but it is primarily because of the low paying No Match bets we are making. While this is a very simple example of progressive wagering, don't let these small prizes fool you entirely; let's take a look at the bigger picture.

If you are using a selection system of any value to choose your No Match numbers, then you should see a hit every 12 days on average. You may hit on the first day or you may hit on the sixteenth day, but overall, since you are covering 160 total No Match numbers, you should see an average of 30 hits each year (1 hit every 12 days). Your average payoff with this system is roughly $34.00 per hit. Sometimes you will profit as much as $70.00, and sometimes you will break-even, but $34.00 is the average return. Now for a little math. If we have 30 hits in a year, with an average profit of $34.00 per hit, we are looking at an annual profit of $1,020.00. Still, not a fortune, but things are certainly looking better. Remember, you are only working with a total investment of $300.00. If you were to put the same money in the bank at 2% interest, then you would only make $6.00 for the year. Me? I'll take the chance and go for the $1,020.00 return over $6.00 any day!

Still not satisfied? Okay, let's take our $1,020.00 profit for the year, add it to our original $300.00 bankroll, and throw another $180.00 investment stake into the pot. This gives us $1,500.00 to work with for the following year. We can now use the same schedule and increase our daily bet by five times each day. On DAY 1 we would bet $50.00 and so on. Now our average return is $170.00 per hit and 30 hits in the following year will give us a return of $5,100.00. And remember, we are only playing 10 boxed No Match numbers each day!!! The next step is to move up to compound progressive wagering insurance where we can begin playing our numbers in straight (exact order) form and really start cashing in. It just gets better and better. The world of Progressive Wagering is waiting for you!