It's official - The exclusive Steve Player EASY MONEY-4 CLUB is now ranked as our most successful numbers Club ever. It has also been one of our best kept secrets, previously available only to a limited number of members who signed up early. Now it's your turn to get in on this proven money winning opportunity through this very special offer.

When the EASY MONEY-4 Club was first introduced several years ago, it quickly became many of our customers all time favorite winning programs. In fact, four out of every five EASY MONEY-4 CLUB members renew their memberships year after year. That's the best endorsement I could ever ask for, because if our members were not winning, they certainly would not renew!

When I first started the Club I knew that it would be very successful, but not even I could predict that we would see as many as 100 winning numbers in a single State's Pick-4 game in just one year! But that, my friends, is exactly what happened. If you were lucky enough to get on board early, then you too already know all about these historic game shattering winnings firsthand.

There is a very good reason that the EASY MONEY-4 CLUB is the most successful and profitable Pick-4 numbers club we have ever offered: THESE NUMBERS WIN REAL CASH!  Our lucky members in North Carolina have already been treated to exactly 100 winning numbers in a one year period. Each of these winners were Pick-4 DOUBLE numbers (ex: 1123) that paid exactly $400.00 for a $1.00 boxed wager. Therefore, if you played my numbers in the North Carolina game during that record breaking one year period, you would have won $40,000.00 based on simple $1.00 wagers. If you had played each number for $10.00 boxed, then your one year winnings would have been $400,000.00. That my friends is pure POSITIVE CASH FLOW! Take a look at the table below to see how many winning numbers we hit in the North Carolina game each month and how much these numbers paid. Think about this: hitting 100 winning numbers in one year averages out to more than one hit every four days!!! 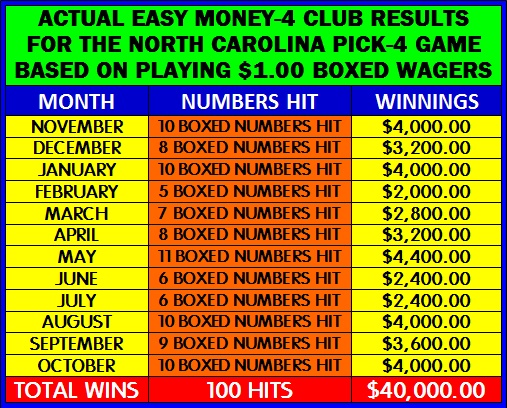 These numbers are based on the same technology that has already made history in so many games around the country. The program which I created to select these numbers is truly without equal. The monthly EASY MONEY-4 numbers are all derived using a proven technology that uses a specific trend analysis to focus on the most likely Pick-4 numbers to be drawn next. Best of all, there is nothing for you to figure out! I will be doing all of the hard work and sending you the exact numbers which I feel are the most likely to be drawn in your State's game. Just play the numbers I send you and get ready to start cashing in lots of winning tickets!!!

As an EASY MONEY-4 CLUB member, you will receive my three BEST BET numbers for your State's game every month along with a specialized group of expanded numbers. You can play just the three BEST BET numbers all month long, or play them until they hit and then add new numbers from the expanded list after that. You can also choose to play the expanded list numbers for the entire month. Either way, you will have direct access to what I consider to be the very best boxed Pick-4 numbers available anywhere for your State's game. The amazing results that these numbers have continually shown around the country speak for themselves. Our members have already seen that this is a proven winner - now it's your turn to win! 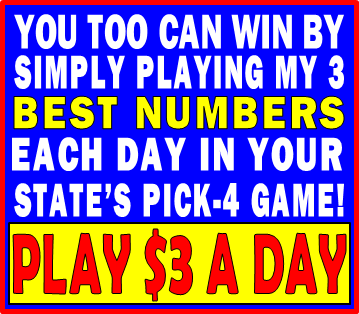 Previous years memberships were extremely limited and we were forced to turn away far more players than we accepted. This year we will be offering twice as many total memberships and we will again ask that all members agree not to wager more than $10.00 on a single number each day. This is done to protect the other members who are playing the same numbers and to prevent the State Lottery from closing out one of our numbers. With a $10.00 maximum daily wager, you can still win up to $4,000.00 each time one of my numbers is drawn. I think that $4,000.00 per hit should be more than enough to keep everyone very happy and quite wealthy!!! 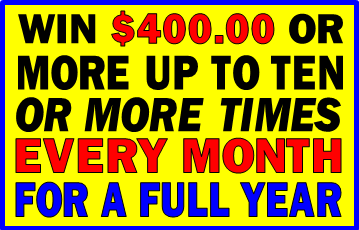 I know everyone can benefit from a steady stream of winning Pick-4 tickets, each of them worth $400.00 or more. If you are ready to PLAY TO WIN, then I urge you to sign up today. Isn't it time that you joined all the other happy Club members who continue to win with my EASY MONEY-4 numbers year after year? They know a good thing when they see it, and that's why they keep coming back for more. Join us today and see what real winning tickets look like!!!

YOU CAN SELECT YOUR STATE GAME DURING CHECKOUT by simply entering your chosen State Pick-4 game selection into the comments and instructions box.