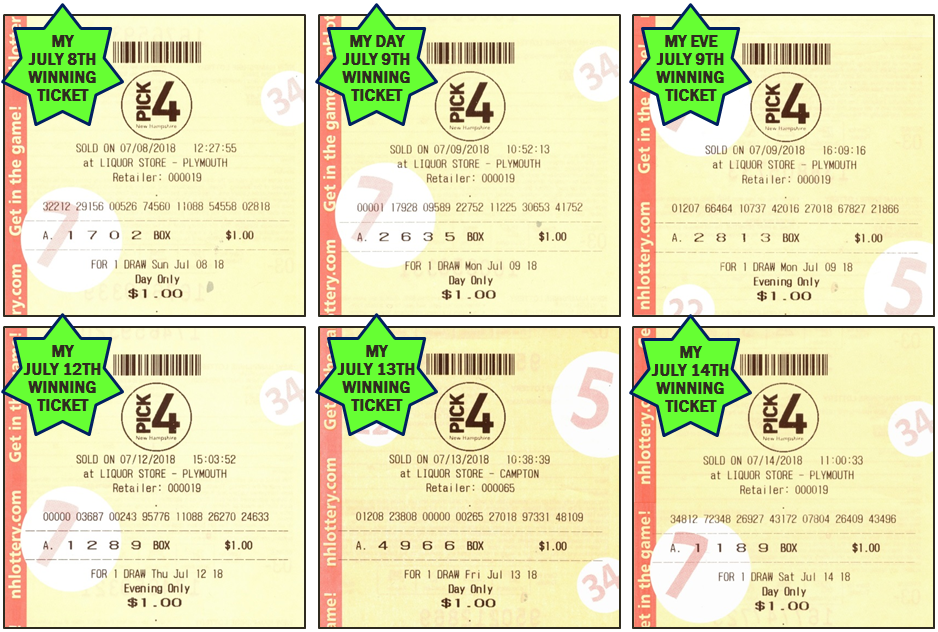 I have truly outdone myself with a system that literally turns the Pick-4 game inside out! As you can see from the six winning tickets shown above, I recently unleashed my incredible new CASH COMMANDER-4 winning system on the New Hampshire Pick-4 game, and I won six times in a single week. How is this possible? It wasn't that hard since the winning numbers came from one of the most powerful and EASY TO USE systems I've ever developed!

Forget everything you ever thought you knew about the Pick-4 game. The CASH COMMANDER-4 system is a brand new proven winning method that will have you jumping up and down with delight. Six winning Pick-4 tickets on Boxed No Match (ex: 1234) or Double (ex: 1123) numbers are worth between $1,200.00 and $2,400.00. Can you imagine winning that much cash in a single week, and then doing it again and again? That works out to potential winnings of between $62,400.00 and $124,800.00 in one year. That's a life changing amount of money, and it's what the CASH COMMANDER-4 system is all about: WINNING BY TAKING COMMAND OF THE GAME!

Think about this for a moment: all you need are two of your PRIME DIGITS to be drawn, and you will win at least $200.00 if a No Match number is drawn, or at least $400.00 if a Double number is drawn. With just 2 PRIME DIGITS right, if you wager $5.00 Boxed (Any Order) on the Ready-To-Play numbers that this system gives you, you will win between $1,000.00 and $2,000.00 in one day, and this applies to every Pick-4 game in the country.
But wait, it gets even better. If you are placing $5.00 Boxed wagers, and either three or all four of your PRIME DIGITS are drawn, you will find yourself cashing in up to $6,000.00 worth of winning tickets that day!!! I can see many of you getting ready to write a letter telling me that this system will not work because your State's Pick-4 game requires you to play 4 digits. Yes, I already know that! The CASH COMMANDER-4 system turns your 2 PRIME DIGITS into Ready-To-Play Pick-4 numbers that pay you either $200.00 or $400.00 every time your 2 PRIME DIGITS are drawn, all while playing simple $1.00 Boxed wagers. And did I mention how super easy this system is to use!

There's an old saying that goes: "The proof is in the pudding," and the pudding my friends is shown on the other side of this page in the form of six winning tickets. I already knew that this system was extraordinary, but even I was surprised when it hit six times in just seven days from July 8th through July 14th. Take a close look at my winning tickets and you will notice that I won both the Midday and Evening drawings on July 9th! That has never happened to me before, and it not only put cash in my pocket, but it put a great big smile on my face too!!!
By now you must be thinking that there has to be a catch, and you're right, there is! I firmly believe that this system is so powerful, that I have no choice other than to release it on a very limited basis. Only a handful of players in each State will have the opportunity to use it in their game - and I already know that those players will be seeing a boatload of cash-paying winning tickets.
This is the debut release of the revolutionary CASH COMMANDER-4 system, and it is available on a first come first served basis, so I urge you to respond today. Many of my friends are about to win a lot of money - I hope you are one of them!!!

The payouts of $200.00 and $400.00 described above are based on the National average for a successful $1.00 wager on Boxed No Match or Double numbers respectively. Some State’s payouts differ. The Steve Player Lottery systems described and offered on this website represent the leading edge of applied mathematical Lottery Number analysis and hybrid conditional wheeling technology. While these systems have shown favorable results in the past in legally sanctioned State Lottery Games, neither the Publisher nor the Author make any claims, expressed or implied, as to the effectiveness of these systems in any game during any period of time. All Lottery games contain certain inherent elements of risk. These systems do not claim or in any other way imply that they can or will eliminate that risk entirely. The systems described on this website are presented as mathematically founded guidelines to illustrate said risk in such a manner as to allow a player to structure his or her legal wagers with a full understanding of the predominant limitations and constraints of the games indicated. Users of these or any other systems are advised to wager only monies which they can afford to lose. The only guarantees are those proposed by the mathematical formulas contained within the actual wagering structures and the hybrid or conditional wheeling schedules. Neither the Publisher nor the Author shall be held liable for any errors or omissions.