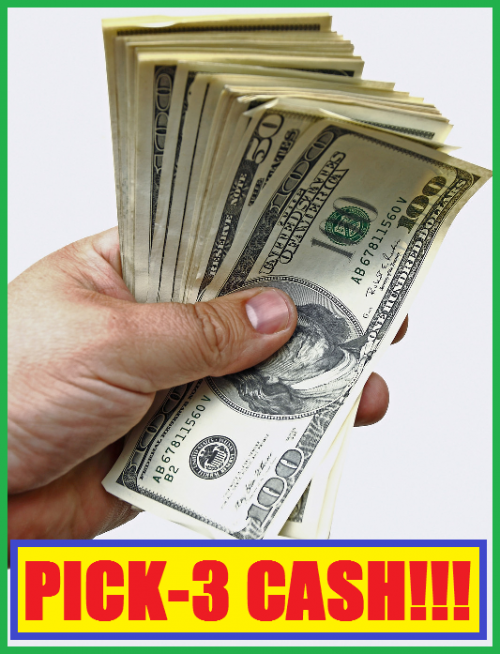 Are you looking for a powerful Pick-3 system that gives you a new set of ready-to-play numbers in straight (exact order) form for your State's game each and every day? Do you want a system that DOES NOT require you to pick your own numbers or figure out any complicated formulas?

If this sounds like the winning method you have been searching for, then I am very excited to tell all my online friends about my newest block buster Pick-3 system: The PICK-3 DAILY RUNDOWN. This system is the culmination of months of work that was developed using a huge database of past results from every Pick-3 drawing, in every State, since the games first began. This database has allowed me to create a cash winning formula that no one else has.

We recently released 50 copies of this brand new title to our system testers who used it in Pick-3 games all around the country. The feedback was immediate and overwhelmingly positive. Our system testers reported multiple wins in both their Midday and Evening games and they all agreed that this was one of the easiest to use systems that they had ever tried. These system testers are real people who not only love to play the Lottery, but more than anything else, they love to WIN THE LOTTERY!!!

This is a special early release for a brand new title. You can only order it online, and it will only be available for a limited time. You are receiving this special pre-introductory invitation because you recently signed up for our FREE number promotion. The FREE numbers which I gave out have now hit an amazing 64 times in 30 States in just one month. Hundreds of players who signed up for these FREE numbers won cash in their State's games, many of them winning for the very first time in their lives. In just the first 10 days, many folks have won $500.00, others have won $1,000.00 or more, and some folks have even reported winnings of $10,000.00 or more.

I have been helping players around the country win their games since 1982. As you can see from the results of my FREE number promotion, my numbers really do win, and they win big! No one spends more time studying the inner workings of the Lottery games than I do, and all of the knowledge I have amassed over the past 36 years is the winning edge that allows me to pick these CASH PAYING winning numbers and create my proven winning systems.

Congratulations to everyone who cashed in on my FREE numbers. If you want to see this winning streak continue, then I urge you to order a copy of the PICK-3 DAILY RUNDOWN system today and put it to work in your States game right away. This special pre-introductory offer for the PICK-3 DAILY RUNDOWN system will only be available for a limited time, so don't miss out. The sooner you order your copy, the sooner you too can start seeing the positive results that come from using a proven winning system to cash in on straight Pick-3 numbers that pay $500.00 every time they hit.