I CASHED IN AN ASTOUNDING

KWIK CASH GAVE ME THE FASTEST RETURNS EVER

HOW MUCH CASH DO YOU WANT TO WIN?

In 2011 I received a letter from a long time customer who claimed to have developed a fantastic new system to win the Pick-3 and Pick-4 games. This customer has asked to remain anonymous, so let's just call him Mr. Quinn. I get many letters like this and I am always interested to see new ideas and new technologies from other successful players. This time, however, things were a bit different, as the letter also included copies of Mr. Quinn's winning tickets...lots and lots of winning tickets. Every week or so I would receive another letter from Mr. Quinn with more copies of his latest winning tickets. This went on for several months, and it became obvious to me that my friend just might be on to something here, so I asked him to forward a copy of the system to me.

Once I received it I began to test this method in not only the New Hampshire games, but in Pick-3 and Pick-4 games around the country. While Mr. Quinn's system was producing a large number of winners in every single Lottery State, I made a few small changes and increased it's winning percentage even further. Realizing that this was the real deal, I quickly contacted Mr. Quinn and purchased the exclusive rights to the system. Yes, I was so impressed by the results that I was more than willing to write a big check.

I then began to use my newly named "KWIK CASH" system in the New Hampshire Pick-3 and Pick-4 games and cashed in a whopping $49,920.00 in just 29 days. You can see my actual winning checks shown below. Keep in mind that I also cashed in a fistful of winning tickets right at the stores where I played. Since they only keep so much cash on hand, I eventually had to go to the State Lottery office to redeem the rest of my winning tickets. My actual 29 day winnings were close to sixty thousand dollars. The best part of the KWIK CASH system is how fast it produces winners and how few numbers you actually have to play. 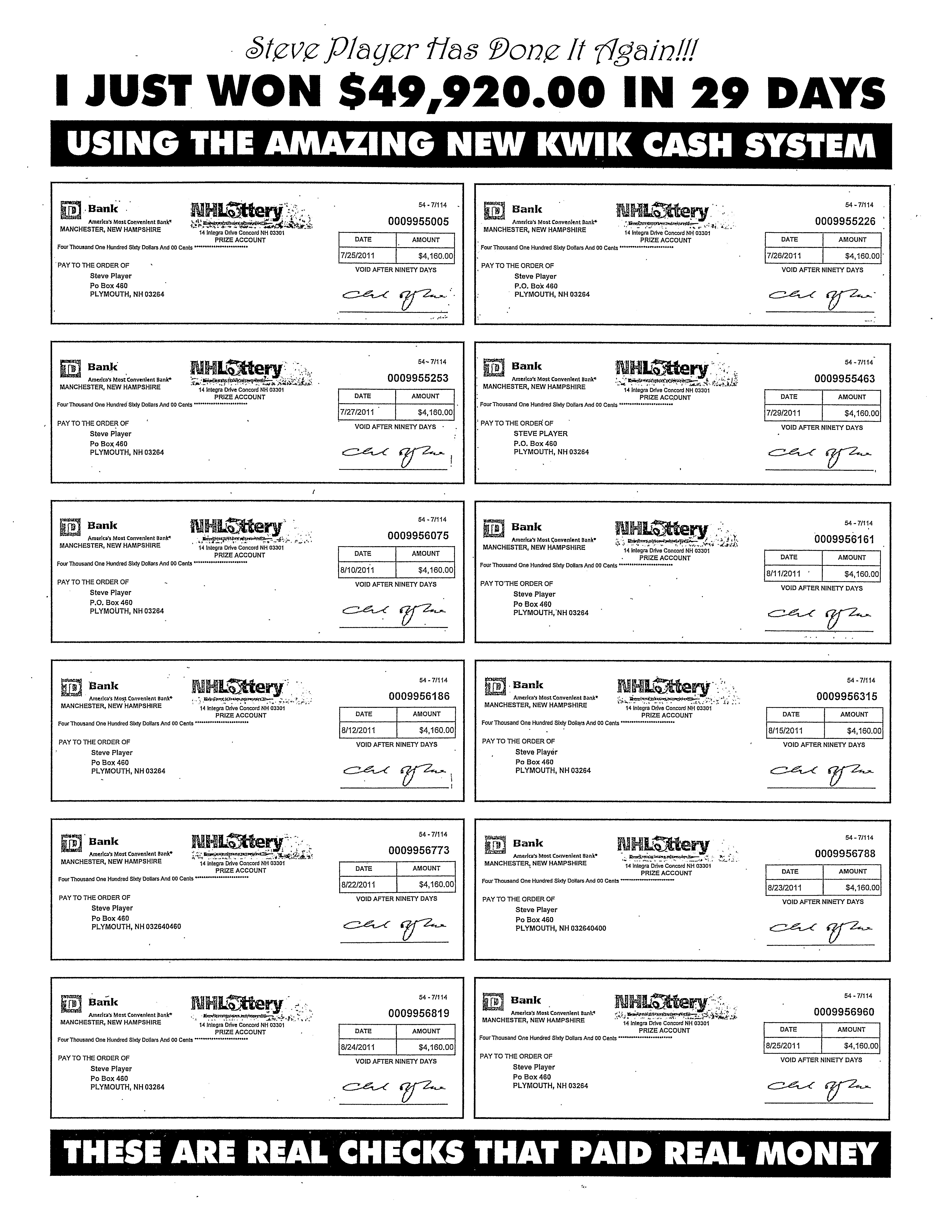 When I first released this system in the fall of 2011, players all around the country began to see huge returns in their games as well. In a matter of just a few months, the KWIK CASH system gained a cult following from coast to coast, with many players reporting the largest cash winnings they had ever seen. I knew I was on to something when I first laid my eyes on this system, and now, many years later, the KWIK CASH system continues to produce the same powerful results for scores of players who simply would never play the Lottery without it. Winning tickets and winning check simply don't lie, and year after year I continue to see an amazing number of copies of winning tickets from my customers who are using this system. Are you ready to join all of the big winners who have cashed in with KWIK CASH?

The Pick-3 version of this system requires you to play only 6 numbers each day while the Pick-4 version requires you to play only 12 numbers per day. That's a pretty low price to pay for big returns. The key to the system is that you are only playing high paying combinations, and you are playing them in BOXED or ANY ORDER form. Plus, your wagering dollars are protected by my exclusive Progressive Wagering Insurance. I am still amazed at how fast this system delivered BIG CASH results. A clerk at a local store where I play asked me if I had a new system when he suddenly saw me cashing in so many winning tickets. He laughed when I told him that I was actually playing one of my customers systems. I continue to use this system to this day for the simple reason that it has never let me down - it works that well!

Order your own copy of the KWIK CASH system and you too can start winning today. I call this winning system KWIK CASH because that's exactly what it brings you: QUICK CASH!!! Believe me when I say that this is the fastest way I have ever seen to make money playing the Lottery, and it is one of the easiest to use systems ever developed. In fact, if you start using this system right now, you may find yourself stuffing stuffing your pockets full of cold hard cash in no time at all! I urge you to order your copy of the KWIK CASH system today so that you too can cash in with the POWER of POSITIVE PLAY!