I used my Wynntek System to hit four Pick-3 straight winners in 7 days.

Can you imagine hitting the Pick-3 game four times in one week? Can you imagine doing it by playing only straight numbers? A few weeks ago I would have agreed that this was probably not possible, or at the very least, highly unlikely. Well, just last week I used my brand new WYNNTEK system in the New Hampshire State Lottery Pick-3 game, and now I am here to tell you that it is possible. And to top it all off, I have four winning tickets and four winning checks to prove it!!! 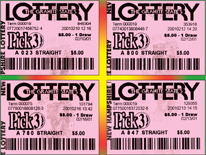 I have been working on the new WYNNTEK systems since late last year. After many months of testing and fine tuning, I was finally ready to put them to the ultimate test: playing a real Lottery game with real money. I think that my amazing results speak for themselves! There is an old saying that goes: “it's not whether you win or lose, it's how you play the game.” I say hogwash to that saying! When it comes to playing Lottery games it simply does not apply. Playing the Lottery games is all about winning, and my new WYNNTEK systems for the Pick-3 and Pick-4 games are all about winning too!

Just last year I introduced my incredible Prime-Line Systems for playing boxed numbers in the Pick-3 and Pick-4 games. I personally took these systems right onto the Lottery battlefield and put them to the test, winning well over $120,000.00 in less than four months. The Prime-Lines instantly became the most successful system I had ever offered for sale, and folks all around the country started cashing in tickets. Then the first wave of letters started pouring in. People were writing to tell me how delighted they were with the systems, and they sent along copies of their winning tickets. I was happy, my customers were happy and the State Lotteries were quite unhappy. It seemed that everything was just the way it was supposed to be!

And then it happened: the second wave of letters began to come in. People were still excited about the system and very proud to show me their winning tickets, but somehow they were not satisfied. It seems that boxed or

combination winners were not enough anymore. Imagine that! Suddenly everyone was asking if I could produce the same fantastic results with a system that dealt with Pick-3 and Pick-4 numbers in straight form. Instead of giving me some time off, everyone wanted me to get right back to work. No rest for the weary I guess!

So I listened, and I worked and worked and worked, and I finally figured it out. I created the new WYNNTEK systems that deal with the Pick-3 and Pick-4 numbers in straight form. No boxed or combination bets; just the straight numbers which you asked for. And then I put the system to work in the New Hampshire Pick-3 game and won four straight winners in a single week for a ten thousand dollar windfall. Are you happy now??? I hope so because I am ready to take the next month off (sort of)!!! The new WYNNTEK systems are available right now and they are ready to go to work for you in your state's Pick-3 and Pick-4 games.

I can hear all of you out there saying to yourselves: “Okay Steve, we know you're good, but no one can create a system that hits four straight winners in one week.” To that I answer: just because no one has ever done it before, doesn't mean that it couldn't be done. In fact, the way this system works is through an incredible formula that no one has ever used before. When you do the WYNNTEK workout you are not even dealing with the actual numbers in your Pick-3 or Pick-4 game. No, that was not a misprint! The WYNNTEK workout does not track the actual numbers in the game. How can this be? That, my friends is the very secret that makes this system so powerful. Instead of looking at the numbers in the game and determining which ones are hot or which ones are overdue, you eliminate the numbers altogether. By getting the numbers out of the way, you are able to convert the game to pure measurement. Each number drawn is converted to a “TEK.” What is a “TEK”? If I told you that then I would essentially be giving the system away.

Is this getting confusing? Trust me, it's actually a very simple concept, and one which you will have no problem applying to your game. Believe me, it will all make perfect sense once you start using the system.

If a stranger walked up to you on the street and asked you to guess his shoe size, you would probably guess wrong (unless you were a shoe salesman perhaps). Now, if you were able to measure his foot first, then your answer would probably be correct. With the WYNNTEK system, instead of guessing which numbers are going to hit, you are able to measure the activity of the game. How? You want to know everything don't you!!! Well guess what? I am willing to answer that question right here and right now. I explained earlier that I have applied a concept to the game that has never been discovered before. This concept is called “Saltation.” I bet that most of you have never heard of that word before. That's okay, because this will become one of your favorite words very quickly. Why? Because the concept of saltation, when applied to a Lottery game through the use of the WYNNTEK system, can make you very rich. Webster's dictionary defines the word saltation as: “...sudden change, movement or development...”. In a Lottery game, the numbers change, the activity moves and trends develop.

The missing piece to this complex puzzle has always been the actual method of measurement. The WYNNTEK system is the elusive method of measurement that makes it all work. When you use the system you begin by converting the number drawn in your game last night to a “TEK” through some simple subtraction (10-3=7). Next you use saltation to measure your “TEK”, and finally, you convert your “TEK” back into a number through simple addition (7+5=12). That's the whole workout in a nutshell, and it only takes a few minutes to do the whole thing.

When designing this system I wanted to be sure that the workout was simple enough for anyone to do. I tested the workout by having some second graders try to do it. They were not told that it had anything to do with the Lottery. It was presented to them as a fun numbers puzzle. Not one of them had any problem doing the simple addition or subtraction for the workout. I realize that not everyone out there is a math whiz, and this test proves that you don't have to be to use this system. If you have at least a second grade education, then you will be able to do the workout and use the WYNNTEK system in Pick-3 and Pick-4 games. Don't be threatened by the new words like "TEK" and "saltation" which I am using. In the end they only mean WINNING!

Okay, it's time to get down to the questions that are undoubtedly in everyone's mind right now. Namely, how much does it cost to use the system? You can play either the Pick-3 or Pick-4 version of the WYNNTEK system

Now for the biggest question of all: How much does this system cost? This may actually be the biggest surprise of all. Even though printing, trucking and postage costs are all going up, this time the price has gone down. I won a small fortune playing the Lottery last year, and as you can see from my winning tickets, I am starting this year off with a bang as well. Since I believe in sharing the wealth, I am offering the new Pick-3 and Pick-4 WYNNTEK systems for only $179.95 each. You have all been asking for a super powerful system for the Pick-3 & 4 games that can produce straight winners. I have created that system with WYNNTEK and I am making it very affordable to everyone.

I urge you to keep something in mind. There are many people out there selling Lottery systems, and the truth is, most of the systems don't work. Maybe that's why I don't see many of these so called experts using their own systems. I am a Lottery enthusiast just like all of you. I get a huge thrill from playing and winning the Lottery games. I use my systems, and as you have seen from all of my winning tickets over the last 20 years, I use my systems to win money. Please remember, I am on your side. I am a player, just like you...and I want all of you to be winners, just like me! I cannot think of a better way to help you become a winner than to make my systems available to everyone.