YOU REALLY CAN WIN AS MUCH AS

READY TO PLAY NUMBERS THAT HAVE ALREADY WON A FORTUNE!!! 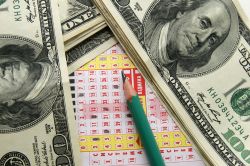 I have some important and exciting news to share with you, and it is reserved for my very best customers only. In fact, I have had to wait exactly five years to tell you about it! Let me explain what I mean by that. It was December of 2006 when I created what I consider to be one of my best winning Pick-3 and Pick-4 systems of all time. It was a breakthrough system that I designed for my own personal use and which allowed me to win between $12,500.00 and $80,000.00 in as few as just 2 days. I called it the Two Step System and it was only released to a very small select group of my premiere customers. The Pick-3 version was originally offered for $495.00 and the Pick-4 version originally carried a price tag of $995.00, making this one of the most expensive winning systems I had ever offered for sale.

When I first released a limited number of these systems to my elite customers in 2006, I agreed that I would not sell any more copies of the systems for at least five years. Well my friends, on December 15th, 2011, this five year period has expired, and I am now ready to once again release a small number of additional copies of this amazing winning system. Let me begin by telling you all about my revolutionary Two Step winning System and what it can do for you.

What makes this system so much different, and so much better, than all the other Pick-3 and Pick-4 systems is that it has been designed to reward you with huge winnings for hitting just two successful numbers. Let me explain. In the Pick-3 game you will be investing only $20.00 per day on my ready-to-play straight numbers. The first day that you hit, you will take your winnings and reinvest them the following day. A hit on the second day pays you either $12,500.00 or $25,000.00 cash. You then put that money in your pocket and start again. Your next two hits will pay you an additional $12,500.00 or $25,000.00, and so on. Every two consecutive hits pay you either $12,500.00 or $25,000.00 cash! There is no fine print here, just pure fact. Now you can understand why the Two Step System has been the best kept secret in Lottery circles for five long years. Anyone can win an occasional Pick-3 bet for a $500.00 return, but this system then allows you to use the State's money to secure a major payday of $12,500.00 or $25,000.00; even more in the Pick-4 game. And best of all, I will show you exactly which numbers to play in black and white.

TWO HITS IN THE PICK-3

The Pick-4 version of the Two Step Winning System brings even higher returns into reach. Your first hit will pay you $5,000.00, which you will reinvest over the next 3 days. A single hit on any of the 3 days after your first hit will reward you with either $40,000.00 or $80,000.00 in cold hard cash - AGAIN AND AGAIN! It really is that simple, and I will show you the exact numbers that you should play for each day. There is no gray area here...everyone using the system will play and win with the same numbers. That's why there is a strict limit on how many systems will be sold.

TWO HITS IN THE PICK-4

IN AS LITTLE AS

You may be wondering why there are two different amounts of cash that you can win: either $12,500.00 or $25,000.00 in the Pick-3 game and either $40,000.00 or $80,000.00 in the Pick-4 game. That's a great question and I would be more than happy to answer it. The way this system is designed, on certain days you will have one or more duplicate red hot numbers to play. Although you are still playing the same amount of numbers, on these days you will actually double your winnings. This is just another one of the powerful attributes that make me consider the Two Step method quite possibly the best Pick-3 and Pick-4 system ever created. I should know, because like the privileged players who bought this system five years ago, I use it and I win with it. In fact, based on the letters I have received from customers using this system, it has been responsible for a fortune in winnings all around the country.

By now you are probably thinking that you could win tens or hundreds of thousands of dollars by using this system in your State's Pick-3 and Pick-4 games, and you are exactly right. That's why for the last five years I have been getting letters from people around the country who missed the first release of the Two Step Winning System. They have been literally begging me to please sell them a copy, but I always had to refuse. This second release of the Two Step System will not last long, andf once they are gone, that's it.

I have been throwing around some very large numbers as I showed you the amount of money you can cash in using the Two Step Winning System in your State's games. Let me assure you, these are real numbers, and winnings of this level are well within your reach. The Two Step System is very easy to use, it does not require the use of colored pens or complex formulas, and it can put you into the winners circle in a matter of days. Everyone who tries it loves it, and it's unlike any other system you have ever used.