I am about to tell you about an exciting new winning Steve Player system that is certain to change the way you play the Pick-3 and Pick-4 games forever. This is more than just a system, it is actually a tool that turns losing numbers into absolute winners. In fact, this easy-to-use system is so powerful that it averages 2 hits in the Pick-3 and Pick-4 games every 5 days; and that is a guaranteed average. Before I tell you what the SUREFIRE system does, and how it does it, let’s take a moment to talk about the most frustrating part of playing the Lottery: NEAR MISSES.

This is something that happens to every one of us – we play our numbers and miss the winner by just one digit. Or maybe two or even three of our digits are off by just one step. As we all know, close does not count in the Pick-3 or Pick-4 games, so we end up slapping the table and stomping our feet and we try again the next day. Well guess what my friends – with the SUREFIRE winning systems, from now on close does count, and it also pays very well.

Take a look at the two winning tickets shown below for the number 1449 in the November 29th New Hampshire Pick-4 game. As you can see from the Lottery check, these two tickets paid $4,160.00 in cold hard cash. The funny thing is that I did not pick the number 1449 on November 29th. I picked the number 0144. Then how did I win? 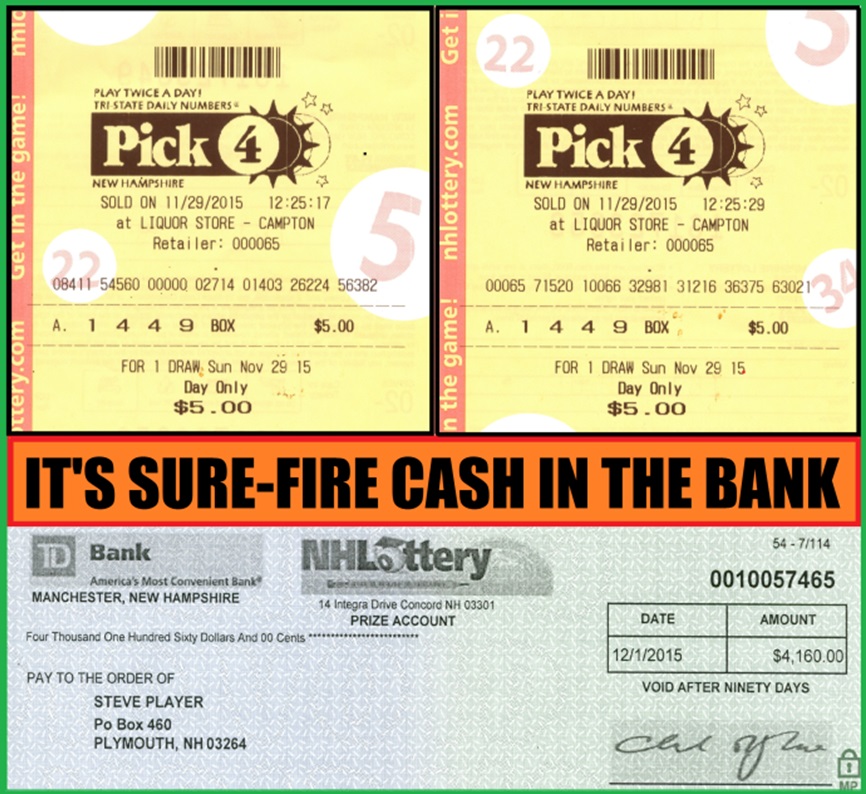 This is the amazing precision power of the SUREFIRE system at work. It automatically converts your Pick-3 or Pick-4 number into a set of very likely related numbers. In this case, the SUREFIRE system gave me exactly seven READY-TO-PLAY numbers for the November 29th drawing, and as you can see, instead of having a losing ticket, I had two winning tickets worth $4,160.00. Thank you very much!

What really makes this an absolutely essential system for all serious players is that these two winning tickets were not an isolated incident. In fact, I have hit as many as 6 winning numbers in the same week using the SUREFIRE winning system. That means that six times in the same week, this powerful tool turned what would have been a near-miss losing ticket into a cash paying winner!!! I only wish that I had created this system thirty years ago, because I would have had so many more winning tickets by now.

I could go on and on talking about all of the winning tickets that the SUREFIRE system has produced for me, but I would rather talk about what it can do for you. Whether you play the Pick-3 or the Pick-4 game, this fantastic proven method can give you a reliable stream of both BOXED (any order) and STRAIGHT (exact order) winning numbers in both games. It can and will turn your near-misses into Lottery cash, and it can do this over and over again. On average, anyone using this system can see two winning tickets during every five day period. Think about that for a minute: An average of TWO WINNING TICKETS THAT PAY CASH EVERY FIVE DAYS THAT YOU PLAY YOUR STATE’S PICK-3 & PICK-4 GAMES. That works out to an average of 146 winning tickets in just one years’ time. When was the last time that you cashed in 146 winning Lottery tickets in just a single year? With that many potential winning tickets now within reach, I would advise you to make room under your mattress for all of the cash that may soon be coming your way!

Alright then, let’s get down to the details of how the SUREFIRE system works. First of all I want to tell all of the skeptics out there that this system does not require the use of past game results, there are no charts or colored pens involved, there are no formulas or workouts to contend with and there is no registration to fill out. When you order the system, we will ship it to you immediately! That means you can put it to work in your State’s games the same day you receive it and you can start winning right away. You can use the Pick-3 version of the SUREFIRE system to win your State’s game by playing as few as 5 total numbers. In the Pick-4 game you can play as few as 7 total numbers, which keeps your daily investment very low. And best of all, my SUREFIRE systems give you the numbers in READY-TO-PLAY form. That means no guessing and no calculating.

Now let me tell you how this winning process works. Taking the Pick-3 game as an example, the SUREFIRE system takes a target number and extends your coverage onto a set of very likely related numbers. You can choose the depth of this coverage by deciding exactly how “tight” or “loose” your related numbers will be. You can choose your coverage based on being just one number off, two numbers off or three numbers off. For example, using the number 248 as our target number, if the number drawn is 238, it would usually be considered a one number off near-miss. Not any more folks!!! The SUREFIRE system would have given you the number 238 and you would have been a winner. What if the number drawn was 338, a two number off near-miss. Once again, the SUREFIRE system has you covered and you would have won because the 338 is related to the target number 248. What if the number drawn was 157? Obviously the number 157 cannot even be remotely related to the target number 248, as not a single one of the digits match. Actually 157 is directly related to 248, and you would have won again! Yes, even if all three digits in your target number are wrong, you can still win.

This same technique works for both boxed and straight numbers in the Pick-3 and Pick-4 Midday and Evening draws. Just imagine how much money you could win putting the power of the SUREFIRE system to work against your State’s games. If I were to reveal any more specific details about this incredibly easy winning method, then I would literally be giving the system away. The bottom line is that I can assure you that you have never seen anything like the SUREFIRE system before, and once you try it, you too will be convinced that this is A HUGE WINNER. Think of all the times you were defeated by a near-miss, and now think about how great it would feel to convert your future near-misses into cash paying winning tickets. The only question left to ask is “what are you waiting for?” The sooner you order, the sooner you too can start cashing in winning checks like the ones shown above. With a guaranteed average of two winning tickets every five days, I am here to tell you that you will see immediate winning results with the SUREFIRE system. Try it today and start winning tomorrow! GOOD LUCK & HAPPY WINNINGS…Steve Player

* The guarantee of an average of two hits during every five days of play is based on boxed Pick-3 and Pick-4 SUREFIRE full system wagers in State’s that offer both Midday and Evening drawings. Certain 5 day periods may show more than 2 hits while others may show less than 2 hits.