After many months of extensive testing, I am thrilled to announce that membership to the most revolutionary Numbers Club I have ever created is now open. There has never before been a program that allows you to win between $500.00 and $15,000.00 a month while playing only SIX TOTAL NUMBERS!!! There simply is no easier way to win your State's Pick-3 or Pick-4 games and to see potential monthly cash returns like the ones listed in the chart shown below. Yes, these are real numbers my friends! 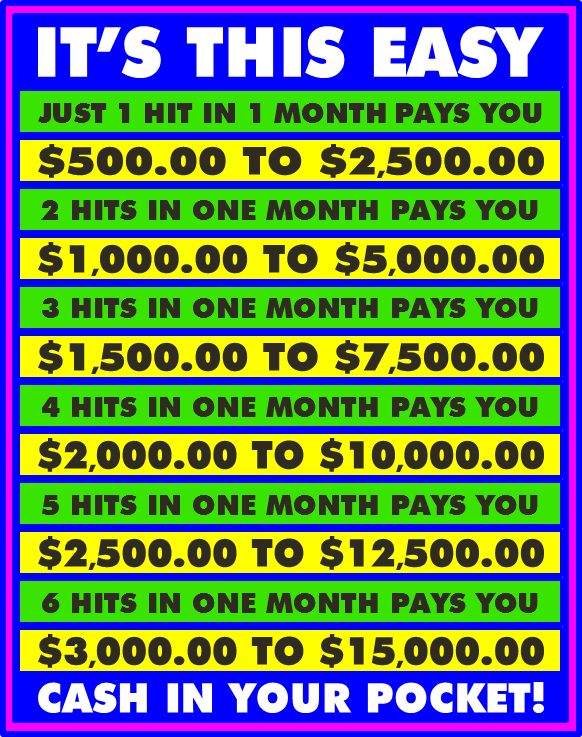 What's so unique about the POWER CASH Numbers Club is the way that you will play the numbers that I send you each month. You will get my six most likely numbers for your specific game every month for a full year. These READY-TO-PLAY numbers are listed in order of preference from #1 to #6. 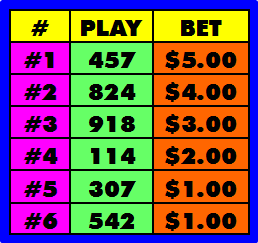 Besides the six MAIN numbers I send you each month, I will also provide you with six additional RESERVE numbers. Every time one of the six main numbers on the list are drawn, simply cross it off the list and substitute the next reserve number. This way you will always have my six best READY-TO-HIT numbers to play in your specific State's game every day!!!

If you are looking for the easiest way ever offered to play the six most likely numbers in your State's games, then the POWER CASH Numbers Club is it. There are no workouts or calculations to do and you do not need any past results. Just play the numbers I send you exactly as they are listed in black and white. If you are a Pick-4 player, then sign up for a year of my top POWER CASH Pick-4 numbers. Pick-4 players can win between $400.00 and $2,000.00 each time one of  my numbers hit. That can add up to as much as $12,000.00 in winnings in a single month! Whether you play Pick-3 or Pick-4, when these numbers hit, you win big!

This is the most exciting club I have ever offered, and with these huge potential returns, limited memberships will sell out very quickly. I urge you to sign up right now - there's plenty of serious cash to be won for everyone!!!