What exactly is a "MUST HIT" number? I'm so glad you asked, because these are the numbers that can put an unlimited amount of cash in your pocket!!! As you know, day after day my computer systems continue to analyze the results of every Pick-3 and Pick-4 game in the country. In each of these games, there is a specific group of numbers that simply MUST HIT, because each individual component of these numbers is critically overdue. These MUST HIT numbers are unique to each State's game, and they are the exact numbers that have been allowing me to win hundreds of thousands of dollars, year after year.

I previously offered my customers the most overdue MUST HIT number for each State's game through the Premium Power Picks program, and players all around the country cashed in big. The only problem with playing just one MUST HIT number was that sometimes it took weeks or even months for that single number to hit. After extensive testing, I have found a much better way to win. My brand new MUST HIT POWER NUMBERS are a list of exactly 10 MUST HIT numbers expressly chosen for your State's Pick-3 game. These numbers are designed to be played in STRAIGHT (Exact Order) form only, which means that each time one of them hits, you will win $500.00 for each dollar you wager. The bottom line is that by playing all ten MUST HIT POWER NUMBERS, you will see more hits, more often. In fact, we have seen as many as five numbers on this list hit in the same State in a single month!!!

The MUST HIT POWER NUMBERS have proven themselves to be the absolute best numbers to play in every State. Best of all, there is nothing to figure out. When you order, I will send you the 10 best READY-TO-PLAY numbers for your State's game - just copy them down and play them. I will also send you a list of 10 RESERVE numbers. Every time one of the MUST HIT POWER NUMBERS hits in your game, simply cross it off the list and add the next RESERVE number. That way you will always have exactly ten MUST HIT numbers to play in your game each day. This amazing list of numbers is custom designed for your game and can be played for up to six months. After you cash in multiple winning tickets in your game, I'm sure you will be back to order an updated list of numbers!

Playing the MUST HIT POWER NUMBERS fits almost every player's budget. Start out by playing just $1.00 on each number until you have cashed in a few $500.00 winning tickets. Once you have seen the power of these numbers for yourself, you may decide to increase your wager to $2, $5 or even $10 on each number. Just think, if five of my MUST HIT POWER NUMBERS are drawn in your State in one month, and you are playing $10 wagers, you would see a return of $25,000.00 in a single month!!! Yes, that's Twenty-Five Thousand Dollars CASH MONEY my friends, and it's yours to spend any way you like! Most importantly, since these are MUST HIT numbers, I can assure you that they WILL be drawn, and if you are playing them, YOU WILL WIN your State's game.

As you know, I have been posting copies of my winning tickets and winning checks for many years. Players all around the country write to me asking how I keep winning so much money so often. The truth is, when you see my $25,000.00, $50,000.00 or $100,000.00 paydays, they are almost always the result of playing MUST HIT numbers. Year after year I improve the computer programs that choose these numbers, and year after year the selection process becomes more accurate.

If you want to play the 10 absolute best numbers in your Pick-3 or Pick-4 game, then I urge you to get a copy of my MUST HIT POWER NUMBERS for your State's games right away. You do NOT need any charts, pens or past results to play these numbers. They come to you as a simple list of 10 READY-TO-PLAY numbers, and each order includes an additional 10 RESERVE numbers to update your list with after each hit. There no is registration process, so when you order, we will send your numbers to you right away. The sooner you order, the sooner you too can start winning. These numbers WILL definitely be drawn, and this is your chance to get them and play them before they hit!!! GET READY FOR A BIG PAYDAY! 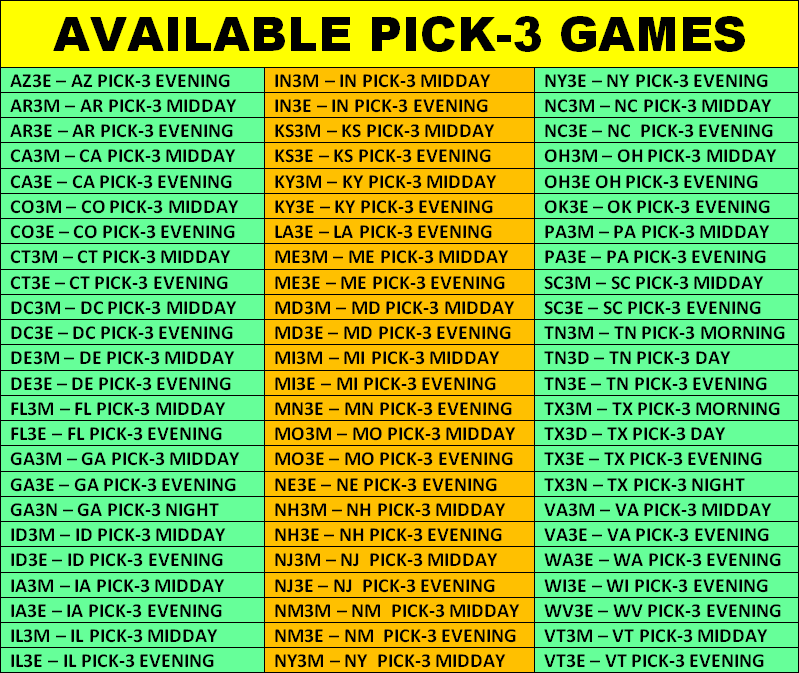 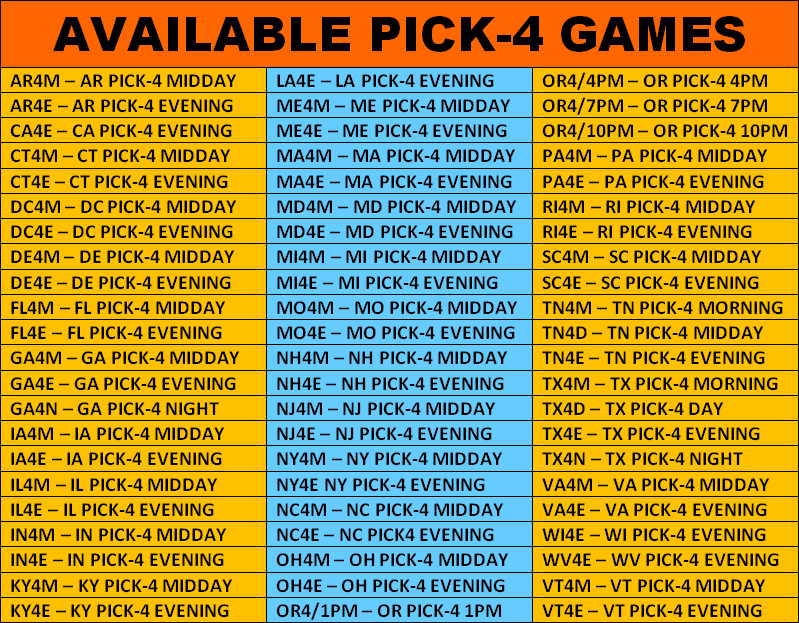 Use the drop-down menu below to order your plan. You can enter your State and Game choice(s) during checkout by entering the game code from above into the "Comments & Special Instructions" section of the checkout menu. (For example, if you are choosing the Arizona Pick-3 Evening game, your game code would be AZ3E. If you are choosing multiple games, enter all the relevant game codes separated by a space.)