Over the years there has been a lot of talk about repeating numbers in the Pick-5 and Pick-6 Lotto games. These are the numbers that are exactly the same from one drawing to the next. Often we see at least one repeater, sometimes two and sometimes even three numbers are the same in two consecutive drawings. This repeating number phenomena has created a lot of hype, and many so called experts have devised all sorts of charts and graphs to track these numbers. The problem is, none of these experts could really figure out what to do with these repeaters, and consequently, they ended up wasting a lot of time on the subject. 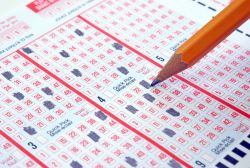 As usual, it was Steve Player who ended up making sense of it all by creating a system that doesn't just track repeaters, but actually uses them to create winning combinations. The system is called LOTTO EASY, and it is the product of a mathematical theory regarding the incidence with which one or two numbers are repeated from one Lotto drawing to the next. LOTTO EASY focuses on every possible combination of these repeated numbers, and then joins them with either four or five INTRICATELY BALANCED numbers which are actually derived from the repeated numbers. These formulas have been tested in PICK-5 and PICK-6 LOTTO games throughout the country and the results positively show that they are not only correct but quite profitable.

This may sound like a mouthful of complex words, but it is actually one of the easiest-to-use LOTTO systems ever created; that's why we call it LOTTO EASY!!! All you need is a pencil and the results of the last LOTTO drawing in your state and you are ready to put LOTTO EASY to work for you.