When Steve Player talks Lotto, everyone listens. The undisputed world leader in Lottery system design since 1981 has shown hundreds of thousands of players how to win, and Steve Player is the only internationally recognized Lottery Guru who puts his money where his mouth is. In 1988, Steve Player predicted all six winning numbers for the New York State Lotto game a full week in advance of the drawing. That week, he and everyone who played his numbers won the Jackpot. None of the other so called experts have ever won their own Jackpot, much less made the winning numbers available to the public prior to a drawing. Steve Player is a winner, and the people who use his systems have the same winning advantage. 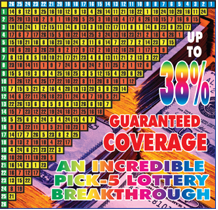 This “Master Numbers Man” has authored over 100 revolutionary books and systems which
are without a doubt the best materials available for serious players. Now, Steve Player introduces a truly phenomenal system designed expressly for Pick-5 Lotto games.

Jackpots are no longer a dream for Pick-5 players, and they are no longer reserved for just a select few. The wave of new 5 number game formats sweeping the country is a dream come true for anyone who wants to claim their very own JACKPOT!!! With odds as low as 65,000 to 1 and a field of as few as just 26 numbers (5/26 GAME), the Pick Fives are without a doubt the easiest Lotto games in the world to beat.

Steve Player has been hard at work developing a breakthrough winning system just for these new games. Because of the low odds, these games allow you to play incredibly powerful systems without spending a fortune. In fact, the new Pick-5 JACKPOT TRIANGLE system allows you to cover as many as 38% of all the numbers in the game. With traditional large field Pick-6 games, this kind of coverage would have cost you thousands if not tens of thousands of dollars. But now, this system can give you this kind of coverage for as little as $21.00 per drawing. Like a dream come true, your own JACKPOT is now within reach!

This system uses the previously drawn numbers to select new numbers for the upcoming drawing. Not only does this system pick the numbers for you, but it also gives you brand new specially developed wheeling systems which you will use to cover up to 38% of all the numbers in the game. It takes just a few minutes to work out the numbers, and the triangle makes this system easy enough for a child.

As Steve Player says: “This is a real system that uses breakthrough technology to beat the best games in the country. As many of you know, I have been developing systems for Lottery players since 1981, and I have never been as excited about any game format before. These reduced field Pick-5 games are the best games I have ever worked on, and this system makes winning easier than ever. It almost isn’t fair, but I don’t think any of us will complain when we are cashing in our winning tickets.”

By offering these systems in very limited quantities we can insure that the Jackpots remain large. We have built into the price exclusive user rights for the very limited group of players who will receive these systems. That means you are paying not only for the system, but for the right to use it, limited to yourself and your immediate family. Each system comes with a serial number registered in your name; this is our way of protecting the small group of players who are paying for the rights to use the system.

If you are serious about winning, then I urge you to stop dreaming and take the first step by ordering the limited edition JACKPOT TRIANGLE system for your state's Pick-5 game today. Don’t delay, your JACKPOT dream is waiting for you!!!