The brand new LOTTO EQUALIZERS from Steve Player recently swept the 1994 ALSRI awards by taking first place in all five Pick-5 Lotto and all five Pick-6 Lotto categories!!! And to top it off, the Lotto EQUALIZER was runner up for the coveted BEST OVERALL SYSTEM OF THE YEAR honors which were awarded to the CASHMAX system. Our congratulations go out to Steve Player for this monumental achievement. Here is a detailed description of the new LOTTO EQUALIZERS in Steve's own words.

I have worked on hundreds of aspects of the Pick-5 and Pick-6 Lotto games over the years, but one of the most intriguing has always been the relative distance between each of the numbers drawn. For example, the numbers 01 and 02 are only one step apart, while the numbers 01 and 10 are nine steps apart. If you look at the results of any drawing you will see that there is a distance relationship between each of the five or six numbers drawn. For example, the numbers 08 - 13 - 23 - 30 - 38 - 47 which were drawn in a 6/49 Lotto game are exactly 5, 10, 7, 8 and 9 steps apart. 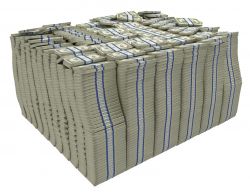 For years I have been perplexed by this concept, knowing that there must be some kind of formula or pattern that directly influences this relationship. I have now finally uncovered this formula which was hidden deep within the complex foundations of the laws of probability.

Like all other patterns and trends in the Lottery games, the distance relationship between the numbers which are drawn must respond to the laws of probability which dictate the existence of a theoretical norm. This theoretical norm exists in every facet of every numbers oriented game, and for me, it has always been the key to understanding how patterns and trends develop, and more importantly, how to foresee those patterns and trends before they happen. For example, if you throw a ball into the air, you know it will eventually fall back down. That is the ball's pattern. What influences this pattern is gravity. Therefore, anyone can make an accurate prediction about what the ball will do when it is thrown into the air and be correct.

When there is a pattern in the Lotto game, in this case a pattern that determines the distance between the numbers, understanding what influences that pattern allows us to predict what is going to happen next. The new formulas which I have created for the Lotto Equalizers are able to make these determinations, and consequently, make accurate predictions for the upcoming drawing. This is a lot of theory to digest, and I only offer it as an explanation of what is behind this system. You do not necessarily have to understand it because all of the formulations are done for you. In fact, the Lotto Equalizers are so easy to use that you only have to fill in the results of your state's last 10 Lotto drawings into the blank spaces on the Master Chart, do a little simple addition, and the system will tell you exactly which numbers to play for the upcoming drawing.

The final step is to find those numbers on the top line of the EQUALIZER WHEEL and draw five or six lines with the special pen that comes with the system. This is a brand new type of wheeling system, unlike anything you have ever seen before. It wheels your numbers into ready-to-play Pick-5 or Pick-6 combinations in under 10 seconds. INCREDIBLE!!! This EQUALIZER WHEEL gives you 100% full coverage of the numbers predicted by the system with as few as 25 total combinations to play.