HUGE COVERAGE WITH UP TO 85% LESS COMBOS TO PLAY

We all like to cover as many Lotto numbers as possible in the Pick-5 and Pick-6 games, but we also know that this can become very expensive. For example, it would cost you $252.00 to play every possible combination of 10 numbers in the Pick-5 game. This will give you great coverage, but that sure is a high price to pay. Well my friends, I would like to introduce you to my brand new CASH-KEY SYSTEM. Now you can play every possible combination of 10 zoned numbers for only $60.00 using TRIPLE TRACT COVERAGE!!!

Whether you play the Pick-5 or Pick-6 LOTTO games, TRIPLE TRACT COVERAGE allows you to stretch your wagering dollars by reducing the amount of combinations you have to play by as much as 85%. Please understand that the CASH-KEYS are not a partial coverage system. By breaking your selections into three tracts, you will still have 100% full coverage of all three tracts containing your numbers. And best of all, the CASH-KEYS can be used to play anywhere from 9 to 15 total numbers with the same great coverage. 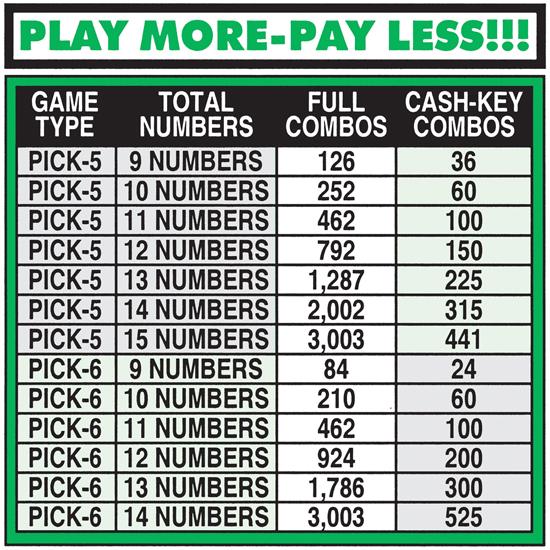 For example, it would take 462 combinations to cover 11 numbers in the Pick-5 game. The CASH-KEY SYSTEM let's you cover those same 11 numbers using only 100 total combinations. Do you want to play 15 numbers? It would cost you $3,003.00 to cover all possible 3003 combinations, but the CASH-KEY let's you play the same 15 numbers with only 441 combinations. That's 85% less numbers to play and 85% less dollars to spend. The CASH-KEY SYSTEM for the Pick-6 game gives you an equally impressive cost reduction when covering 9 to 14 numbers. For example, playing every possible combination of 12 numbers would cost you $924.00, but the CASH-KEY SYSTEM let's you do it for only $200.00 using TRIPLE TRACT COVERAGE to group your numbers into tracts. YOU PLAY MORE & PAY LESS!

Plus, the CASH-KEY SYSTEM is so very easy to use: Just fill your 9 to 15 selected numbers into the blank spaces, copy them into the boxes and you will have your ready-to-play combinations in no time at all. Now you can play more numbers than ever before and be assured that if your numbers are drawn you will have full 100% TRIPLE TRACT COVERAGE. That means you will not only have coverage of all five or all six numbers needed to win the Jackpot, but also broad coverage of multiple lower tier prizes as well. When it comes to playing the Pick-5 and Pick-6 games successfully, we all know that coverage is king...and the CASH-KEY SYSTEM is the KING of coverage! Whether you are a new player, or a seasoned pro, I urge you to put the power of the CASH-KEYS to work today. Everyone loves a winner!!!