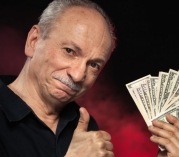 Winning the Lottery is really quite simple – all you need is a ticket with the right numbers on it and you will be rewarded with a stack of U.S. currency! There are several ways to achieve this goal, the most common of course being to pick your numbers out of thin air. While this is how the majority of players approach the games, your chances of winning this way comes down entirely to luck. If you only buy a few tickets from time to time, and simply enjoy the idea of being in the game, then there is nothing wrong with this approach - other than the undisputable fact that your odds of winning are strongly stacked against you every time you play.

The next method is to join a Numbers Club that gives you ready to play numbers based on an analysis of the past results and current activity in your particular game. While many players around the country have cashed in significant winnings playing my Club numbers, there is one inherent drawback to this approach. The numbers given out to our Club members are generated at end of each month and are designed to be played for the entire upcoming month. While these selections are based on very sound and proven selection techniques, they do not take into account the new drawing results that take place in your game on a day to day basis. For this reason, their accuracy is often diminished as the month goes on. Don’t get me wrong, these numbers have an excellent track record and have been responsible for tens of Millions of dollars in winnings for our Club members over the years, however, there is an even better way to increase the consistency of your winnings.

In 2001 I developed a revolutionary Lottery System that forever changed the way players around the world play and win the Lottery. When I first introduced this system, I proved its effectiveness by personally winning $166,400.00 in just 34 days playing the Daily Numbers Games. This was the very first Lottery system that taught players how to “handicap” their games and greatly increase their chances of beating the odds on a daily basis. The system was called the MONEY MAP, and even now, a full eighteen years later, it remains the single most effective system ever developed for zeroing in on consistent winning numbers in both the Pick-3 (Daily 3) and Pick-4 (Daily 4) games.

Thousands of players around the world use this system every day, and virtually all of my Pro Players agree that they would never even consider playing the Lottery without the use of the Money Map. Every week I get letters from players who have just discovered the Money Map system and are suddenly finding themselves cashing in more tickets than they ever before imagined possible. The bottom line is that there can only ever be one “BEST” of anything, and the Money Map system is still widely considered the BEST Lottery system available, even eighteen years after it was first released.

So what is it that makes this system so much more effective than any other system on the market? First let me tell you what the Money Map is not. It is not magic and it is not hype. The Money Map is the result of almost twenty years of my playing the games every day, studying every pattern and nuance that determines what the next winning number will be, and creating an effective MAP that anyone can use to see exactly which numbers are most likely to be drawn next in every State’s games. People who use inside knowledge to invest in the stock market usually make a fortune, and the Money Map is exactly that: inside knowledge that gives you a huge advantage when playing your State’s Pick-3 and Pick-4 games.

I have watched many players try the Money Map method for the first time, and all of them light up immediately. Time after time I have watched them grin from ear to ear when the inner workings of the games are revealed to them. They say things like” “I had no idea,” or “It all makes sense now,” and my favorite response of all: “WOW!!!” It’s like they have suddenly become privy to a huge secret and are now members of an exclusive group that has learned to see the numbers coming before they are drawn! Most importantly, once these players begin using the Money Map system on a daily basis, they are able to begin cashing in winning tickets with a consistency they never realized was possible. Using the Money Map system becomes a way of life, a membership of sorts in a revered circle of knowledge that lets you laugh at the odds, knowing that they no longer apply to you the way they do other players.

If you are ready to aspire to the highest level of systems play, then maybe you too are finally ready to join the thousands of players around the world who follow the MAP that leads them to winning tickets. But I have to warn you – this system is not for the casual player or the faint of heart. The Money Map is big time winning system for big time winning players. That does not mean that you have to make large wagers. In fact, you can effectively use the Money Map system while wagering just a few dollars each time you play. But you do have to be a serious player who is willing to make the commitment to learn a brand new way of looking at the games.

The Money Map will change everything you know about playing the Lottery. Most importantly, this system will change your entire outlook on the games. Once you learn the MONEY MAP technique, you will no longer be interested in “Playing” the Lottery, only “Winning” the Lottery. That’s exactly what the Money Map system does: it turns players into winners!!! If you are ready to join the elite group of enlightened Money Map winners around the country, then click on the yellow link below for all the details of the very BEST Lottery system ever developed: