HOW TO BOX & WHEEL YOUR NUMBERS 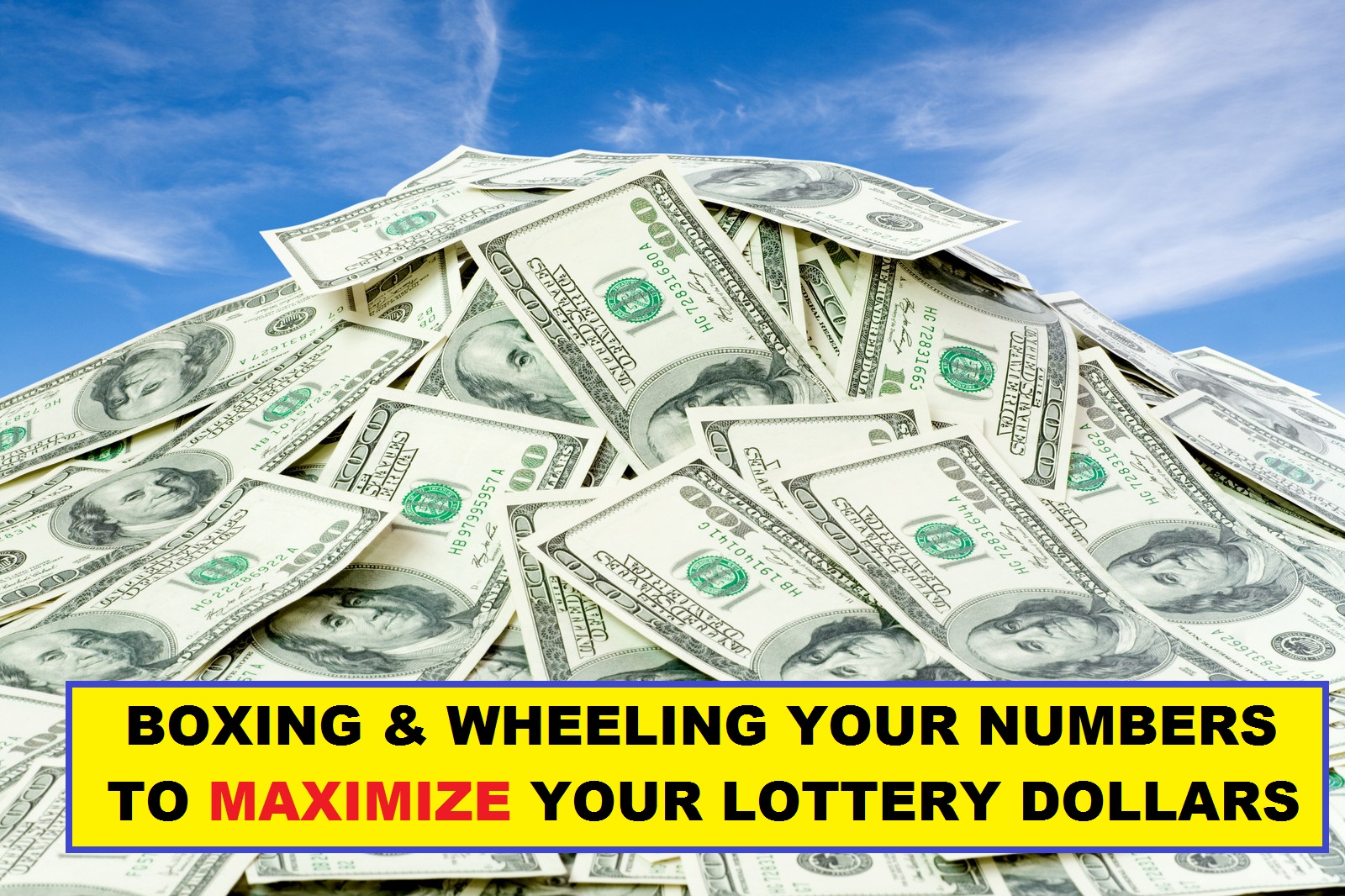 BOXING AND WHEELING YOUR NUMBERS TO MAXIMIZE YOUR COVERAGE

I am here to help you win your State's game, and the best way to do that is to share some of the tips and techniques that I use to win the Lottery games week after week. In the article that follows I will show you two FREE tools that can immediately open up the world of winning Lottery tickets to everyone. Many people have been playing their State's PICK-3 Numbers game for years without having a clue that there are proven methods available to instantly increase their coverage, thus instantly increasing their chances of winning.  Playing the Lottery can be both fun and profitable, but the bottom line is: we all want to win!

I have spent the last 34 years of my life developing many different systems that can help you win the various games. I call these my tools, and after cashing in over 70,000 winning tickets and winning Millions of dollars, I would say that my tool box is full of very effective and proven methods. These are methods that I firmly believe anyone, in any Lottery State, can use to win their games. Today I would like to share two very important tools with all of my friends and fellow Lottery enthusiasts. These tools are called "BOXING" and "WHEELING," and like I said, most players do not even know that they exist. In the examples I am about to present below, we will apply these two distinctly different methods to the PICK-3 numbers game. I urge you to follow along with my examples. What I am about to teach you is something that you can use in your own PICK-3 game right away...and by the end of the day, you just might find yourself cashing in the first of many winning tickets.

Winning the Lottery is not only about having the right numbers, but also it's about having the correct coverage of those numbers. The better your coverage, the better your odds of winning become. The odds of winning the PICK-3 game with a single $1.00 straight (exact order) wager is exactly 1000 to 1. If you play 2 numbers for $1.00 each, then your odds of winning are reduced to exactly 500 to 1. If you play four numbers, then your odds are further reduced all the way down to 250 to 1. Personally, I like those odds (250 to 1) far better than 1000 to 1. But what is equally as important as the amount of numbers you play, is the QUALITY of the numbers you play, and the best way to insure QUALITY is to broaden your coverage.

I will begin with a basic BOXING system that allows you to play five different digits in the PICK-3 game in boxed (any order) form. That means you will be covering half of the ten possible digits (0 through 9) in the game. Instead of playing just three digits like 389, you will now be able to play a total of five digits, for example 1, 3, 6, 8 and 9, in ten different combinations. The five digits you choose to play in your own game are up to you, but for this example, we will cover the 1, 3, 6, 8 and 9. Shown below is a sample of my "5 DIGIT BOX" BOXING system for the PICK-3 game. As you can see in the example shown on the left below, our first step is to fill in our five chosen digits into the spaces in the first row.

The next step, as shown in the second example on the right above, is to fill in the same digit into all of the blank spaces in each column. Keep in mind that rows always run from left to right and columns run from top to bottom. We have filled the digit 1 into all of the spaces below the 1, then the digit 3 into all of the spaces below the 3 and so on. This gives us ten PICK-3 numbers to play for the upcoming drawing. In this case our first number to play is 136, our next number is 138 and our last number is 689. These ten numbers should then be played in BOXED (any order) form for the upcoming drawing. If you want to play your numbers in STRAIGHT (exact order) form, then you will need to use a WHEELING system which will be described in the next section of this article. Using the Boxing system above, if the actual number drawn contains any combination of our 5 chosen digits, then we will be a winner! Keep in mind that this simple wheel only works if the number drawn is a NO MATCH number, which is a number that has three different digits. If the number drawn contains a repeated (DOUBLE) digit, such as 339, then we would not win even though we did have the digits 3 and 9 covered. In order to cover the DOUBLE numbers, we would have to use a different BOXING system. There are many different BOXING systems available which can afford you varying degrees of coverage from 4 all the way up to 10 digits. There are also BOXING systems designed expressly to cover NO MATCH numbers (like the one above) or DOUBLE numbers, or both. If you would like to experiment with some different BOXING systems for both the PICK-3 and the PICK-4 games, as well as the Pick-5 and Pick-6 Lotto games and the Powerball and Mega Millions games, then you can find more ready-to-use FREE examples here: FREE BOXING & WHEELING SYSTEMS. I have included two blank copies of the 5 DIGIT BOX below for your immediate use as well. Simply print them out and fill them in!!! Go ahead and try it for yourself - it's fun and you can use it right now to win real money in your State's game. Next let's move on to a discussion about WHEELING systems.

HERE ARE SOME BLANK 5 DIGIT BOXING

SYSTEMS FOR YOU TO USE IN YOUR GAME

The difference between a BOXING system and a WHEELING system is that one has no regard for the order of your chosen digits (BOXING SYSTEM) and the other one deals with your chosen digits strictly by position (WHEELING SYSTEM). There are three positions in the PICK-3 game, the FIRST position, the SECOND position and the THIRD position. The number 123 contains the digit 1 in the FIRST position, the digit 2 in the SECOND position and the digit 3 in the THIRD position. When using a WHEELING system, you can choose to play any number of digits in each of the three positions. For this example, we will cover the digits 3 and 8 in the FIRST position, the digits 0, 4 and 7 in the SECOND position and the digits 1 and 3 in the THIRD position. This will require the use of a 2 X 3 X 2 WHEEL. Take a look at the first example shown on the left below and you will see how we have carefully filled our chosen digits into the top row of the WHEEL by position. 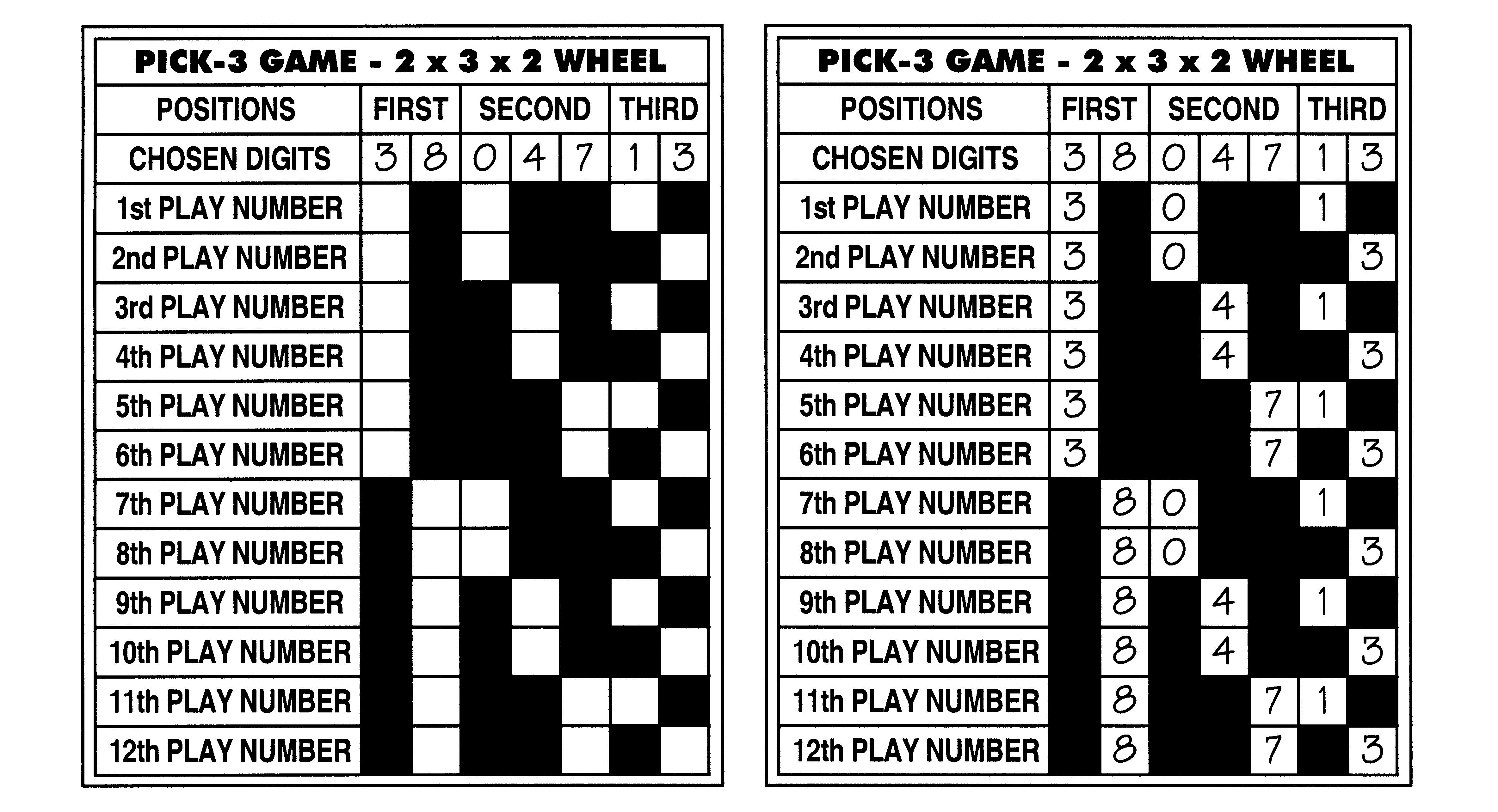 The second step, as once again shown in the second example on the right above, is to fill in the digit at the top of each column into all of the blank spaces in that column. This is the same process we used in the previous BOXING example. We now have twelve numbers to play for the upcoming drawing in STRAIGHT (exact order) form. Our 1st number is 301, our 2nd number is 303 and our 12th and last number is 873. If the number drawn contains either the digit 3 or 8 in the FIRST position, plus any of the digits 0, 4 or 7 in the SECOND position and either the digit 1 or 3 in the THIRD position, we will have a winning ticket. Keep in mind that when you use a WHEEL such as this, you will only be playing your numbers in STRAIGHT form. Therefore, a successful $1.00 wager on any of these twelve numbers will pay you $500.00 in most PICK-3 games around the country. Once again I have included a couple of blank wheels for your immediate use below. Now that you have a basic understanding of BOXING and WHEELING systems, let's talk about all of the variations of these tools that are available to you.

HERE ARE SOME BLANK WHEELING

SYSTEMS FOR YOU TO USE IN YOUR GAME 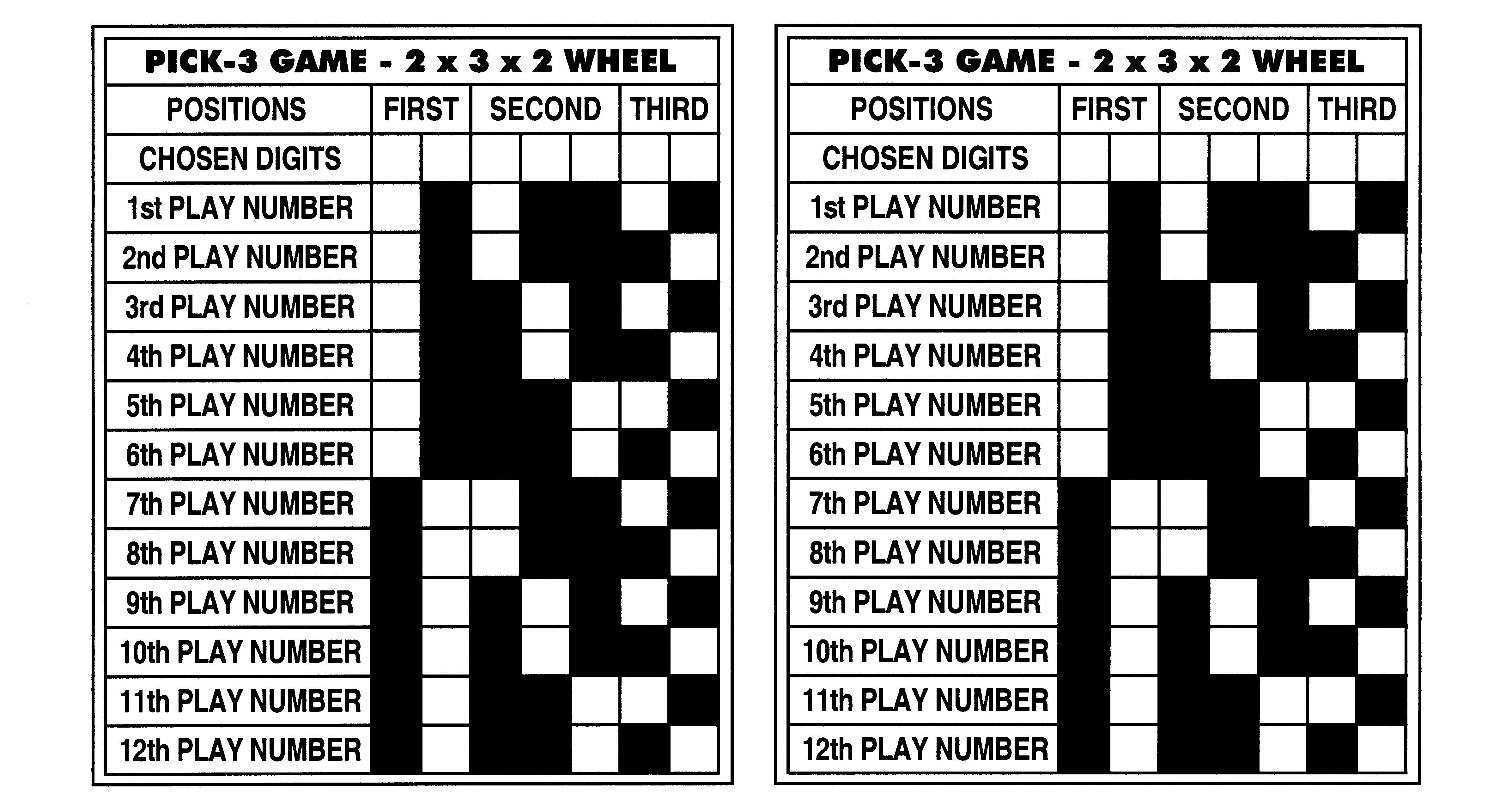 When you enter the world of systems play, you will be choosing your numbers and digits based on hard data. This may include a myriad of different criteria from things as simple as how long a particular digit has not been drawn to more complex evaluations such as pair formations and probability obligations. The point is, a systems player does not just pick numbers out of a hat. He or she will study the trends and patterns in a game and make their selections accordingly. Once they have selected the digits which they feel are the most likely to be drawn next, they will often employ a specific BOXING or WHEELING system to cover their selections. Keep in mind that these WHEELS and BOXES are just a small sampling of the tools that a successful systems player will use at any given time. The more tools you have in your arsenal, and the better you become at using them, the more often you are likely to win the game.

Obviously, the most important thing to remember is that tools like the ones shown above are only as good as the actual digits you choose to play in your State's game. This is where a proven winning system can be your secret winning weapon! If you are just getting started with systems play, then I would recommend using the CASH KING winning systems to help you select your play digits. This is the world famous selection method that tens of thousands of players all around the country rely on to give them a winning edge when selecting their play digits. When you use the CASH KING system, you will be able to make intelligent number selections based on the current trends and patterns that have a huge outcome on the actual numbers that are drawn in your game each day. Best of all, the CASH KING system costs only $10.00, and it can literally lead you to thousands of dollars in consistent winnings year after year! For more information on how to get your copy of the CASH KING system please click on this link: CASH KING WINNING SYSTEM.

I hope that you have enjoyed this article and that it gave you a better understanding of how these tools work. Playing the Lottery is no different than any other skill you may learn in your life. The more you practice, the better you will get at it. Of course, having the right tools also helps a lot! In the coming weeks I will be posting additional articles explaining other proven winning Lottery techniques and sound wagering practices. In the mean time, be sure to share your comments on my Facebook page (Steve Player WIN - THE - LOTTERY) and also feel free to post your own winning tickets. There is no greater satisfaction for me than seeing others win the Lottery using my techniques!!! If you have any requests for future articles, please feel free to email me at sales@steveplayer.com . I am here to help everyone learn and master the art of winning.