THE ART OF WINNING THE LOTTERY

JUST ANOTHER DAY AT THE OFFICE 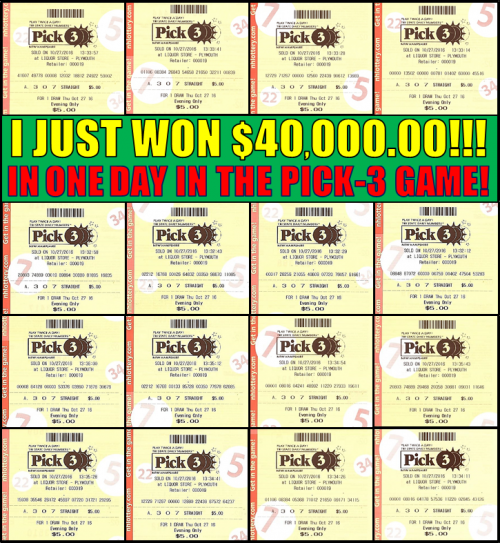 The winning tickets shown above were the result of sixteen $5.00 wagers I placed on the number 307 straight for the October 27th New Hampshire Evening drawing. This $80.00 investment returned $40,000.00, and once again, players everywhere are scratching their heads asking how anyone can be so lucky. After all of the winning tickets I have shown the world, the idea of my just being "lucky" just doesn't hold water. Week after week, month after month and year after year I continue to cash in winning tickets and enjoy huge Lottery returns. The truth, my friends, is that I have devoted the last 34 years of my life to perfecting the ART OF WINNING the Lottery games!

Over the past four decades I have watched dozens of so called "Lottery Experts" appear on the scene touting their amazing and revolutionary new methods to beat the Lottery games. The only problem is that most of these people don't even play the Lottery - if they did they would be able to show you their winning tickets, wouldn't they? Some of them stick around for a few months, and others for a few years, but sooner or later they all disappear without ever showing us the proof of the pudding: WINNING TICKETS. I firmly believe that if you have a system that really does win, then you should be able to prove it by using it to win the Lottery, and that's exactly why I continue to show my winning tickets.

So what's the secret? How do I keep winning? What it comes down to is a lot of research and good old fashioned hard work. I work on beating the games seven days a week, 52 weeks every year. Some people would say that it's an obsession, but it's actually more than that: It's my life's passion! While I truly enjoy cashing in winning tickets, especially the high paying ones, the real thrill for me is knowing that I have beaten the State Lottery at its own game. Face it, the Lottery is designed to make money, not for the players, but for the State, and the odds are stacked 2 to 1 against the player every time you buy a ticket. In other words, the only sure bet is that the Lottery always wins, but I refuse to accept that fact. There are literally hundreds of nuances that determine the results of any Lottery game, and my mission has always been to reveal them and to take advantage of this knowledge by using it to win.

Every time I release a new system, you can be assured that it has been thoroughly tested, not only by me, but by an extensive group of my system testers around the country. If the system does not perform up to my standards, as well as their standards, then it goes back to the drawing board. For every system that I actually release, there are probably 20 to 25 that never see the light of day. I have literally spent years working on a single system, continually testing and tweaking it, only to eventually walk away because it turned out to be a dead end road. That may seem like a huge waste of time, but this tireless testing process is what leads to the depth of knowledge that creates the systems that really do win consistently. This is my job and I love it!

Over the years I have shown tens of thousands of players all around the world how to win their Lottery games, and I get letters and emails every day from these players thanking me for creating the very best winning systems available. Through this process I have helped to create a rather substantial group of PRO PLAYERS who either make their living or significantly supplement their living by consistently winning their State's games using my techniques. I am in constant communication with these players and am astounded by how much and how often they win. Most of these Pro Players use a combination of different systems and many of them devote a lot of time to their favorite hobby: Winning The Lottery! The single trait shared by all of these players is a deep knowledge and understanding of the inner workings of the games. That is truly the key to success. These players understand the risk, the odds and the actual structure of the laws of probability that dictate the eventual results of all Lottery games, and they use this knowledge to make intelligent and profitable wagers.

Some people think that I am absolutely crazy when I make large wagers on a single number. Take my recent win on the number 307. I wagered $80.00 straight (exact order) on this number in a single day. Why would I do this? Because all of my analysis told me that the there was a tremendously high potential for the number 307 to be drawn, and I trusted every aspect of my analysis. As you know, the number 307 was drawn and I collected $40,000.00 - do you still think I was crazy to make this wager? I have also placed $40.00 straight wagers on a Pick-4 number and won $200,000.00. In fact, I have done that on three separate occasions! But I'm not the only one who cashes in on these gigantic single number paydays. My Pro Players do it all the time, and they quietly put the money in their pockets and go on with their lives without making a big fuss about it. These are smart players who don't need the world to know their business, and the State Lottery doesn't want the world to know that winning systems really work either. Just last month a player in South Carolina placed a $64.00 straight wager on a Pick-4 number and cashed in $320,000.00. Large wagers like this are placed all the time and these winnings are very real, even though the news of these wins usually stays below the radar.

Besides the proven winning systems I create, I also offer various number clubs for many games around the country. I have been managing a very exclusive club for Pro Players only for quite some that gives out only straight (exact order) Pick-4 selections for specific U.S. games. These players pay almost $1,500.00 a year for these selections, and they win at least $5,000.00 every time one of my straight Pick-4 numbers are drawn. The truth is that very few of these Pro Players wager only $1.00 on these numbers. Instead, they may wager $5.00 or $10.00 or more on my numbers and often win $25,000.00 or $50,000.00 each time they hit. Once again, this has absolutely nothing to do with luck. Based on my detailed analysis, these are virtual "MUST HIT" numbers that my club members are given to play, and they pay very high dividends every time they are drawn.

How does a regular player become a Pro Player? There is no magic formula, no secret handshake and no Superman cape that can propel you to this level overnight. It is a process, and it begins with a commitment to learn everything you can about the inner workings of the games that you play. Pro Players are an elite group of Lottery enthusiasts who take their pursuits very seriously. They all started out with a single system and took the time to learn how to use it properly. Most of them began by making small wagers and then compounded their winnings into a formidable bankroll before moving on to a second system, and so forth. With each step, these players became more educated about all of the nuances that determine which number or numbers are most likely to be drawn next. Each time they win, it reassures them that they are on the right path to long term victory. There are often many ups and downs along this road to success, but as we all know, anything worthwhile takes a certain degree of effort.

Are you ready to elevate your Lottery play to the next level? Are you ready and willing to learn what you need to know to become a better player? Are you ready to start cashing in your own winning tickets? If this sounds like the winning path you would like to put yourself on, then I would suggest taking a look at my SUREFIRE systems for the Pick-3 and Pick-4 games. These systems are an excellent and affordable starting point that can quickly show you what it feels like to cash in your first of many winning tickets. To make sure that you have all of the tools you need to succeed, I will be sending out a FREE copy to the CASH KING winning system with all SUREFIRE SYSTEMS ordered before November 30th. Used together, this is a proven winning combination. To learn more about the SUREFIRE winning systems, click on the link below: