WHY YOU SHOULD NEVER PLAY QUICK PICKS 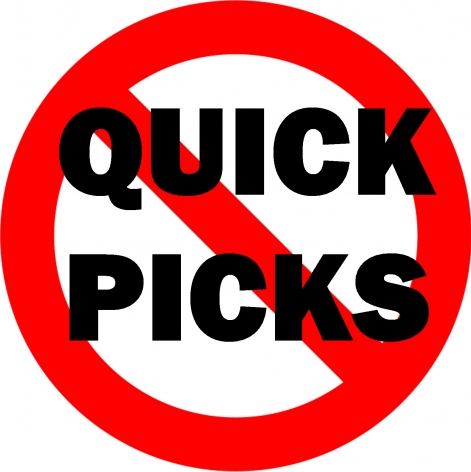 WHY YOU SHOULD NEVER PLAY QUICK PICKS

Players often ask me whether or not they should use the “Quick Pick” option when buying their tickets. My answer is always a resounding “NO.” Let’s take a look at the facts, and I think you will soon understand why I take this position. First of all, I need to dispel a major myth that seems to be at the heart of the confusion regarding Quick Picks. It is a well known fact that over 80% of Lottery prizes in this country are paid to purchasers of Quick Pick tickets. If that is true, which it is, then one would think that Quick Picks are the way to go because this is where most of the winning tickets are found. Consequently, what people fail to realize is that the vast majority of all losing tickets sold for any given Lottery drawing are also Quick Picks.

The bottom line is that when you purchase a Quick Pick ticket you are essentially relying on luck, and luck alone, to fulfill your desire to win a cash prize. We all know someone who has won on a Quick Pick, but we also all know a lot of people who have bought many Quick Pick tickets and lost. To analyze the actual odds at work here we can use some simple math. Let’s take the common Pick-3 game as an example. There are exactly 1,000 possible Pick-3 numbers that can be drawn in this game and the payoff for a winning number in straight (exact order) form is $500.00 for a $1.00 wager. If you bought one Quick Pick ticket for this game, your odds of winning $500.00 on your $1.00 investment is exactly 1000 to 1. Therefore, if you were to buy a $1.00 Quick Pick ticket for this game each day for 1,000 days, you would most likely win $500.00 once during the 1,000 days that you played. This translates to a loss of $500.00. If you were to buy 1,000 Quick Pick tickets on the same day, you would most likely have one winning ticket, which again represents a loss of $500.00.

Of course, since the Quick Pick option essentially chooses your numbers at random, you may actually end up with three winning tickets when you buy 1,000 Quick Picks on the same day. That would be a $1,500.00 win on your $1,000.00 investment, but this is purely the result of luck. If you bought 1,000 more tickets the next day and 1,000 more tickets the day after that you may not see any winning tickets at all. In this scenario you would have invested $3,000.00 over three days to win $1,500.00 on the first day only, which means you would have lost $1,500.00 over the course of the three days. The revelation here is the inescapable fact that the Lottery games are designed to always be 2 to 1 against the player. Keep in mind that the Lottery only exists because it is a huge cash cow for the State that runs it. The very structure of the games themselves dictates and insures that the Lottery will only pay out approximately 50% of the money that they take in.  This means that on average, every dollar you spend on the Lottery, will guarantee you a loss of fifty cents. If you buy $1,000.00 worth of Quick Picks you will on average win $500.00, which means that you will lose $500.00 in the process.

I know people who have spent $1.00 on a Quick Pick ticket for the Pick-3 game and won the very first time they played. This is pure luck my friends, and nothing more. I also know people who have bought Quick Pick tickets for years and have never won. It’s all about the averages. Continuing this example in the Pick-3 game, if 1,000 people each buy a $1.00 Quick Pick ticket on the same night, then ideally just one of those players will win $500.00 and the other 999 players will lose $1.00. Once again, in this example a total of $1,000.00 was wagered and a total of $500.00 was won. So what are the actual odds of winning when you buy a $1.00 straight Pick-3 Quick Pick ticket? This is a very simple calculation: You have exactly 1 chance in 1,000 of winning and exactly 999 chances in 1000 of losing.

The same disparaging odds are extrapolated in all of the other Lottery games as well, including Pick-4, Pick-5, Pick-6, Powerball and Mega Millions. In simple terms, when someone wins a $1,000,000.00 prize in one of these games, you can be assured that the Lottery sold $2,000,000.00 worth of tickets and that 1,999,999 of those tickets were losers!  Sure, you might win a big prize when playing a Quick Pick in any of these games, but the odds are against it. If you do win, it is nothing more than luck, and if you do play Quick Picks for a long period of time, the odds are indisputable that you will lose roughly 50% of all the money that you wager.

Knowing that every Lottery game is so severely skewed against the player, one would think that the best bet is actually not to play at all! From a strictly fiscal point of view, this may be a strong argument, however, there is another solution: Use a proven winning system to beat the Lottery games. The State Lotteries hate system players like me because we undermine the unfair advantage that the State has over the games. Not only do system players like me affect the State’s bottom line, but we also challenge the notion that the games are entirely random. For example, on several occasions I placed a $40.00 straight wager on a Pick-4 number in the New Hampshire State Lottery and won $200,000.00. On average, the NH Lottery sells $4,000.00 worth of Pick-4 tickets for each draw. Therefore, on the days that I won $200,000.00, the State took a loss of $196,000.00 in this game. No, they were not at all pleased about that!!! I actually could have won a lot more, however, the State of NH will only take a maximum of $40.00 in straight wagers on a single Pick-4 number for each drawing. Clever folk’s, aren’t they!

System players like myself are a rampant annoyance to the State Lotteries because we know how to overcome the odds of the games through the use of proven analysis techniques and a disciplined understanding of the laws of probability . I make a very good living playing and beating the Lottery games, and system players like myself are living proof  that these games can be beaten time and time again. While the Lotteries don’t like system players, they do tolerate us, because for every successful system player there are hundreds of thousands of regular folks playing random numbers or buying Quick Picks, and this majority playing populous is what keeps the Lotteries profitable. From where I sit, the choice is very clear. There are two types of Lottery players: Those who pick their numbers out of a hat or play Quick Picks, which helps feed the State Lottery profit machine, and those who use proven winning systems to beat the games and line their own pockets with Lottery cash. Which category do you fall into, or more importantly, which category would you rather be in?