DREAMS, HUNCHES AND OTHER WAYS TO PLAY THE WRONG NUMBERS

LOTTERY HUNCHES, DREAMS AND OTHER WAYS TO PLAY THE WRONG NUMBERS 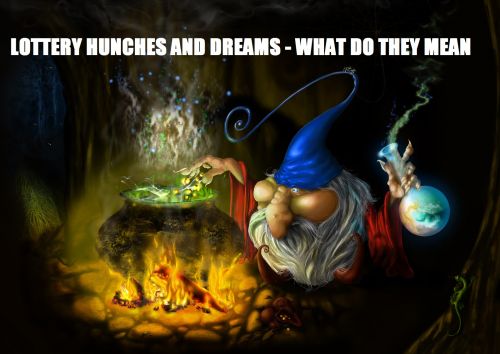 Today I would like to share an honest discussion about playing dream numbers and hunch numbers in the various Lottery games. I personally dream about numbers every night, but that’s because I work with them all day long. I have heard stories about folks who had a dream about their recently departed Uncle Louie who told them to play the number 347 for instance. It’s the same story time and time again, with Uncle Louie being interchangeable with Aunt Gladys or Mom or Dad and the number 347 being any number from 000 through 999 and everything in between. The truth is, you usually only hear about these stories when the number actually comes in and the dreamer gets to stuff some cash in his or her pockets. They don’t tell you about all the other times they dreamt about numbers, played them and lost. The story just isn’t as apt to be shared if it does not have a happy ending. On the other hand, some people are truly psychic to varying degrees and they may have the ability to dream about winning numbers, however, I have never met anyone who can perform this visionary trick with any measureable level of consistency.

The only way to win on a regular basis is to study the numbers each and every day and track them with a proven winning system. But what about all the people who win on a hunch? For example, on his way home yesterday Joe was following a car with a license plate that read 8488. A few miles further down the road, he got a cell phone call from a telemarketer whose phone number ended in 8884. Joe then stopped at the gas station to fill up and the total came to $48.88. At this point Joe decided that he would have to play the number 4888 boxed in the Evening Pick-4 game. Guess what? The number 1702 was drawn. So why did this hunch not pan out? If you are a real numbers player, then you will constantly be aware of numbers that surround you in your daily life. A four digit number like 4888 stands out for the simple reason that one of the numbers (the eight) is repeated three times. The more you are into numbers and Lottery games, the more likely it is that a number like this just sort of catches your eye. If you see it once during the day, then it perks your interest, If you see it twice in the same day it might make you smile and wonder if you should play it. If you see it three times in the same day, you scratch your head and wonder what’s up as you dig through your pocket for a twenty dollar bill and run to the nearest Lottery terminal. The truth of the matter is, the odds of seeing that number three times in one day are very high, and in turn, the odds of seeing it a fourth time in the form of that evenings Pick-4 daily number are even more remote.

On the other hand, if you did your daily number workouts, and you found that the triple eights were very overdue, especially when coupled with the digit four, and you had a similar experience to Joe’s ride home, then you would probably be willing to climb over other customers backs just to get to the Lottery terminal in time to play the number 4888. In this case you left the house thinking about the number 4888 because it was truly due, and therefore, every time you saw that number or anything very similar during the course of the day, it would trigger your subconscious mind to pay attention. So the question remains, should you play the 4888. Yes, absolutely, but only because your workout told you to. The rest is all just tricks that your mind is playing on you. But you never really know for sure, do you? My suggestion? Throw an extra ten or twenty bucks on the 4888 just in case!!!

Here is one of my favorite stories about hunches and recurring numbers. My longtime friend Jimmy is an avid Lottery player, but he is very reckless and somewhat lazy in his approach. If he saw the number 4888 three times in one day he would probably bet at least $100.00 on it. Needless to say, Jimmy has, over the years that I have known him, bought far more losing tickets than winning ones. Jimmy does not use Lottery systems and refuses study the Lottery games. Yet he never hesitates to ask me to give him some winning numbers! A couple of years ago he came over to have a beer and mentioned that something funny was going on and that he had a very good “Hunch” that the number 714 was going to be drawn soon. He proceeded to tell me that almost every morning when he wakes up, he looks at his clock and it is blazing the same number: 714. It just so happens that Jimmy was also born on July 14th (7/14). Day after day, that pesky 714 is the first thing he sees every morning, and he is sure that it is a sign of some sort. In fact, he has been playing the number very heavily for quite some time waiting for his ship to finally come in. As he told me the story, my smile grew bigger and bigger and finally turned to all out laughter. “What’s so funny,” he asked me? I asked Jimmy if he used an alarm clock, to which he replied “yes.” I then asked him what time it was set for. He told me that it was set for 7:15, but that he always woke up right before it went off and hit the snooze button. This made me laugh again, and I then explained why the number 714 was haunting him.

Humans are creatures of habit, and we tend to train ourselves without even knowing it. No one likes the sound of an alarm clock, so if it is set for the same time, year in and year out, our internal clock eventually anticipates when it will go off. In Jimmy’s case, a monumentally classic creature of habit, he would usually wake up between 7:10 and 7:14. That means that he had a 25% chance of seeing the number 714 first thing every morning. If the first number he saw was 710, 711, 712 or 713, then he probably would not pay it any mind. But since the first thing he sees every morning, at least 25% or more of the time is the number 714, which corresponds to his birthday, it sets off that mental trigger which makes him take notice. He did not buy my theory and continued to play the 714 for almost two more full years, but to no avail. Finally, and without my knowledge, he decided to test my logic and he changed his alarm clock to wake him up at 7:00 o’clock each day. About a month went by and finally the number 714 was drawn in his Pick-3 game. I saw Jimmy a few days later and asked him if he had won when the 714 came in. Totally demoralized, with a combination of fire, disgust and sheer surrender in his eyes, he looked at me and said “No, I have been playing the number 659 because I see it almost every morning and it’s also the last three digits of my phone number!”

Now “Qualified Hunches”, on the other hand, are an entirely different matter. Qualified Hunches are those nudging feelings you get, and the numbers that pop into your mind, when you are really into following, tracking and analyzing the Lottery games on a regular basis. Here’s my theory on how and why this happens. The human mind is a very complex thing, far more so than any computer that has yet been created. The more time you spend tracking and studying the numbers in your game, the more ingrained the patterns and tendencies of those numbers become in your mind. There are parts of your brain that are literally thinking about things and processing fragments of data all day and night without you ever knowing it. Think about how many times something just jumps into your mind when you are thinking about something totally different. It happens to all of us each and every day. If you spend 30 minutes each morning analyzing the results of yesterday’s drawings in your States games, your mind will continue to process that data throughout the day without you even knowing it. All of a sudden, in the middle of the afternoon, while sipping a cup of coffee and talking to a co-worker, the idea of playing the double fours coupled with the one or the eight may jump to the forefront of your mind for no apparent reason. If you then go back and look at your charts, you may see what you missed earlier that day and you will see how valid a wager this actually is. This is called a Qualified Hunch, and it is built upon hard analytical data, and as such, it is well worth paying attention to and placing a wager upon.

I have taught hundreds of people how to hone this technique through the use of the Money Map systems for the Pick-3 and Pick-4 games. With my approach, you actually train yourself to build up a relationship with all ten digits in the game. These digits each exhibit distinct personalities and you will in time learn to understand those personalities. The activity in every Pick-3 and Pick-4 game comes down to nothing more than how those ten digits interact with one another. Once you begin using a system like the Money Maps for a while, you will begin to develop an ability to use your hunches to make very sound winning wagers. To the uninitiated, this may at first sound completely impossible, irrational or just plain totally crazy, but I assure you that it really does work. There are hundreds of players in States all around the country who have learned these techniques and become bona-fide Pro Players who make a very good living or substantially supplement their living playing the Pick-3 and Pick-4 games.

The bottom line is the fact that all Lottery games respond to the laws of probability which dictate how the various digits interact with one another on both a short term and long term basis. Winning the Lottery games is not rocket science. What it comes down to is learning how patterns and trends work and then using that knowledge to accurately forecast what is going to happen next. Like everything else in life, learning how to do this requires an investment of time. You have to be willing to study the games in order to beat them. There is a definite learning curve involved if you want to become good at this. I have personally won $200,000.00 placing a $40.00 wager on a straight Pick-4 number. In fact, I have done it on three separate occasions in the New Hampshire Pick-4 game. Many skeptics have asked why I did not bet $200.00 or $500.00 on my number that day. The answer is very simple: New Hampshire will only accept $40.00 in total wagers on any straight Pick-4 number each day!!! Each time I did this, I broke the bank, and the Lottery had to dip into their reserves to pay me. In fact, total Pick-4 sales on the days I won were less than $10,000.00. Yes, I am very good at what I do, but I am also very good at teaching others to play the same way that I do. Once you learn to master the winning techniques, you too can play with a high degree of confidence when relying on your Qualified Hunches just like I do.