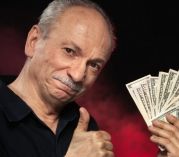 As the State Lottery odds get higher and higher, Steve Player continues to conquer them with his brilliant, award-winning books and playing techniques. After accurately predicting the winning numbers for over 90 separate FIRST PRIZE U.S. LOTTO JACKPOTS since 1981, the MASTER NUMBERS MAN personally won the New York State PICK-6 LOTTO Jackpot on April 25th, 1988. And that was just the beginning. Since that time, Steve Player has won the Lottery in 21 different states!!! Where ever Steve Player goes, big winning tickets usually appear. Here is a brief chronology depicting just some of the renowned achievements of the undisputed greatest Lottery genius of our time.

It all started in the early 1980’s when Steve Player, a prodigal mathematician and gifted computer programmer developed an aspiring enthusiasm for playing the New York State Daily Numbers and Lotto games. Steve found that by using his computers to chart and analyze the various games, he was able to cash in winning tickets with amazing regularity. At the same time, a small special interest publication by the name of WINNING NUMBERS was being created in the basement of a typesetting company in Westchester County. After reading the first few issues, Steve Player went to visit the folks who were publishing this paper. He arrived at this initial meeting with folders full of statistics, systems and charts as well as an arm full of photocopies of his recent winning tickets. The managers of WINNING NUMBERS decided to immediately hire him as a regular columnist, and with the addition of Steve’s revolutionary contributions, the publication, as well as the Steve Player name soon became a household word among Lottery players throughout the New York and Tri-State area.

Within a year, Steve Player started two separate publications of his own, “WIN WEEKLY and “LOTTO LOGIC.” Newsstands throughout the state began to sell these two publications right next to their Lottery terminals, and an entire sub-culture of systems players began to emerge. At the same time, Steve founded a company called Player Graphics Publishing, dedicated to educating Lottery players worldwide to the value of progressive wagering systems and the statistical analysis of patterns and trends.

In the next few years, the publications “WIN WEEKLY” and “LOTTO LOGIC WEEKLY” were published nationally, opening up a wealth of winning weekly predictions to players throughout the United States as well as Canada. This was followed by the introduction of Steve Players first Lottery system: THE HITWHEELS. The year is 1983, and the introduction of the HITWHEELS lays the groundwork work for what is now known as the Lottery Systems Industry. Players everywhere were cashing in their first winning tickets ever, and the Hitwheels became responsible for record prize payouts in numerous Lottery games. Suddenly, the odds were turning in the players favor as the concept of systems play began sweeping the country. Articles about the system and its’ author begin appearing in newspapers and magazines across the USA. Everyone wanted in on the winnings and Player Graphics continued to grow into the industry leading source for all the Steve Player books and systems.

Over the next few years Steve Player introduced numerous books and publications targeted towards specific areas of Lottery play. His acclaimed new national weekly publication LOTTO LOGIC, was regularly publishing the winning numbers for LOTTO games across the country days and weeks prior to the actual drawings. Dozens of so called experts begin publishing their own systems, but Steve Player easily maintained his position as the industry leader by giving his readers actual numbers that they could play and win with. By 1988, Player Graphics Publishing had over 400,000 satisfied customers. In April of that same year, Steve Player again completely shocked the entire Lottery community by not only predicting all 6 winning New York Lotto numbers a full week in advance of the drawing, but by also playing those same numbers himself and winning the Jackpot. Everyone who played Steve’s numbers that week won the Lotto Jackpot. This accomplishment, the envy of all of the other so-called experts, has never been repeated and probably never will; at least not until Steve Player does it again!

In 1993, Player Graphics Publishing was taken over by the OPCOMM Corporation. Relieved of the day to day responsibilities of running a large company, Steve Player moved to a remote log cabin in the Northeastern United States in order to devote all of his time and energy to what he does best: developing Lottery Systems and picking winning numbers for his followers. He currently owns and operates the largest and most powerful computer network dedicated entirely to tracking and beating the various Lottery games being played throughout the world. Hidden away in his mountain top retreat with his seven cats, the reclusive Steve Player is years ahead of anyone else in this field.

Since his move in 1993, Steve Player has literally taken the art of Lottery playing to higher and higher levels with each system he has developed. To introduce his WYNNTEK system, Steve won $10,000.00 in just 1 week playing the Pick-3 game. Soon thereafter the MASTERCASH REDLIST hit the scene cashing in $5,040.00 in only 13 days. With his insatiable desire to help players around the country win their games, Steve Player embarked on his now famous National Lottery Tour, taking his remarkable Pick-3 WINMASTER system on the road. In just 21 days, your man on the move won the Pick-3 game an astounding 40 times in 16 States.

No one is quite sure whether there is something special in the air or in the water up in the mountains of New England, but whatever it is, Steve seems to thrive on it. Each ensuing system that was developed became a more aggressive attack on the various Lottery games. The 3-DAY CASH PLAY system demonstrated its power and precision by bringing home $4,323.00 in just 3 days. Becoming restless, Steve then decided to make a public announcement that he was headed to Florida to win their Pick-5 Lotto JACKPOT in one month or less. This is as bold a statement as anyone could ever make, but the MASTER NUMBERS MAN backed it up by using his brand new PAYDAY-5 system to bring home the bacon with another bona-fide FIRST PRIZE JACKPOT in only five days!!! Simply amazing.

The year 2000 saw the introduction of one of the greatest group of systems ever introduced to the general public. In his usual “get right to the point” style, Steve Player unveiled his PRIME-LINE systems by literally taking the New Hampshire Pick-4 game to school, winning $41,600.00 in just a single day, and a total of $67,600.00 during the 39 day introduction period. But that just wasn’t good enough, so Steve went back to the drawing board and emerged at the end of 2001 with what many would argue is the best Pick-3 and Pick-4 Lottery system ever created: the miraculous MONEY MAP. With the whole world watching, our man of the mountains unleashed this system on the Tri-State Pick-4 game, winning a total of $166,400.00 in 34 days playing boxed numbers. He literally broke the Lottery bank when he won an incredible $124,800.00 in one day on one number!!!

After making some improvements to his mountain top retreat, now dubbed “WIN HEADQUARTERS,” and sharing his windfall with his favorite charity, Children International, Steve again focused his tremendous talents on the Pick-3 game. This time it was the introduction of the CASH OVERLAP system in 2003 which relieved the State Lottery of $108,000.00 in 21 days. A large part of this windfall was his successful wager on the number 010 on October 28th, which paid him $100,000.00, a record single day payout to one player on one Pick-3 number!!!

Steve's most recent title, the CASH EYES system showed the world that winning the Pick-4 game with exact order (straight) numbers was now within any players reach. Within a short period of time, Steve personally relieved the New Hampshire State Lottery of $750,000.00 with his winning wagers in the Pick-4 game. There is no disputing that Steve's winning systems really work, not only for him, but also for players around the country and around the world. With Million of dollars in Lottery winnings under his belt, the proverbial proof is most certainly in the pudding!

There has never been anyone quite like Steve Player before. While he loves to play, and loves to win, what drives him the most is helping other players achieve the same amazing results in their own games. His most recent product developments are simply the best winning systems available anywhere, at any price. These systems are literally changing the way people all around the country, and all around the world, play and win the Lottery games. Just take one look at the results of these and the many other winning Steve Player systems featured on this website and you will see that his clearly documented winning results tell the story best. Steve Player puts his money where his mouth is by playing his systems in real games all around the country and publishing the winning tickets for everyone to see. If you want to win, then no one is more qualified than Steve Player to show you how to do it.

The amazingly powerful collection of Steve Player books and systems on this website have helped hundreds of thousands of people just like you realize their dreams of cashing in winning Lottery tickets. You’ll find winning systems for all games, all budgets and all levels of play. But most importantly, every one of these systems have been created for winners, by a winner. When it comes to realizing your dreams of winning your State’s Lottery games, Steve Player will always be your very best bet!!!