THE FASTEST PATH EVER

TO YOUR OWN JACKPOT!!!

If you play the Pick-5 or Pick-6 Lotto games, then I have a very special announcement that is going to change the way you play these games forever. I have developed a brand new system that is truly like nothing you have ever seen before, and I can't wait to tell you all about it. Before I go any further, let me put a smile on your faces with the following statement:

The Formula-5 and Formula-6 Systems are like a dream come true, because now, for the very first time, you can actually play your own personal favorite numbers and finally see the winning results you have always hoped for. How is this possible? I have developed a revolutionary technique called "Positional Overlap," which allows you to turn a single Pick-5 or Pick-6 combination into a group of extended coverage combinations with Ultimate Balance.

TURN YOUR FAVORITE SET OF NUMBERS

INTO WINNING COMBINATIONS WITH 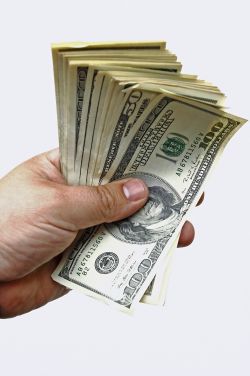 Take a moment to think about that special combination that you have been playing week in and week out for the last 10 years or more. Those same five or six numbers which you can recite in your sleep that keep falling short of the BIG MONEY return that you keep thinking is right around the corner. We all have a set of pet numbers like this, but most of us are lucky to win even a small prize with our favorite numbers every year or so. How many times have you missed the Jackpot by just a few numbers. It's not that your numbers are bad, it's just that they need to be expanded a little bit so that they can finally bring home the bacon for you - and that is exactly what the Formula-5 and 6 systems are designed to do. And best of all, this system is so easy to use that even a beginner can supercharge his or her favorite set of numbers into a set of winning combinations in just 10 minutes time!!!

My Formula-5 and Formula-6 winning systems can be used in every Pick-5 and Pick-6 game in the country with the same degree of accuracy and the same astounding results that our system testers have been raving about. Two dozen lucky customers were chosen to try the Formula system in their games and every one of them told us that that this is an absolute winner.  Instead of me going on and on about these new powerhouse systems, let me show you some real world results so that you can see for yourselves what these systems are truly capable of doing for you.

Next we will move to the New York LOTTO 6/59 Pick-6 game for the same date. In this case let's say that our six favorite pet numbers are 02-12-13-36-53-54. The winning numbers drawn in New York on June 22nd were 19-36-37-44-54-55 and the 6 out of 6 Jackpot Prize was $9.3 Million. Again, you can see that our favorite set of numbers only gave us two of the winning numbers (36-54), which again paid nothing! However, if we used our favorite numbers 02-12-13-36-53-54 and converted them into extended coverage combinations using the Formula-6 system, then we would have had all six winning numbers on the same ticket and we would have won the entire $9.3 Million Jackpot.What would you rather hold in your hand - a ticket with two numbers right or a $9.3 Million Jackpot ticket?

NO CHARTS - NO MATH - AND NO COLORED PENS

NO WHEELING SYSTEMS OR KEY NUMBERS

AND YOU DON'T HAVE TO TRACK PAST RESULTS! 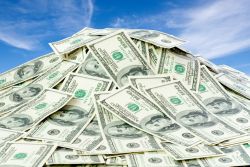 If these winning claims I have presented using the results of three actual games drawn on the same night were not 100% true, then I would not legally be able to print them. The bottom line is that the Formula-5 and 6 systems are like nothing you have ever seen before. For the first time in the history of Lottery Systems, I have created a winning method that can offer you extended coverage of your favorite group of five or six numbers. As you can see, the Ultimate Balance that this systems brings to the table can truly be the difference between winning and losing, and you can play the full system for as little as $25.00, which means you can win big money without losing your shirt!!!

We all have a set of favorite numbers that we like to play, but the unfortunate fact is that those numbers usually don't give us the results we are looking for. It's not that these are bad numbers, it's just that they need to be expanded into winning combinations. The Formula-5 and 6 systems can do this by arranging your numbers into a set of perfectly balanced extended combinations for you to play. Even if you like to change your favorite numbers from time to time, or if you prefer to pick a new set of 5 or 6 numbers for every drawing, the Formula-5 and Formula-6 systems will always turn your favorite numbers into a set of RED HOT Ready-To-Play combinations that can produce real results; the kind of results that can finally put the winnings you have been dreaming of in your pocket.

The amazing thing is that while the Formula-5 and the Formula-6 systems are two of the most powerful tools I have ever created for winning your State's Pick-5 or Pick-6 game, these are also two of the easiest to use systems I have ever offered. Take a few minutes to read the simple instructions and you too will be able to convert your favorite numbers into Ready-To-Play high percentage winning combinations in just ten minutes. Like I said - there is nothing wrong with the numbers you are playing...they just need a little bit of adjustment!

IT CAN CHANGE YOUR LUCK OVERNIGHT!!! 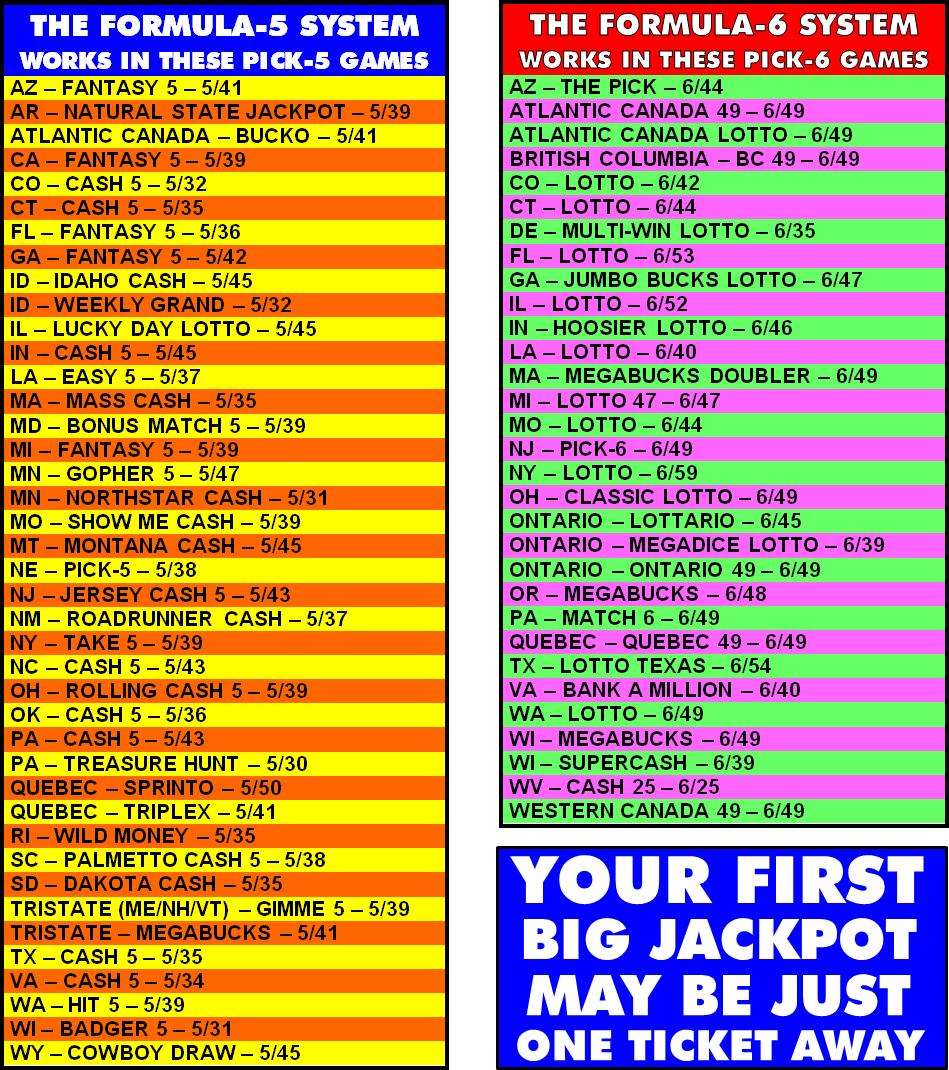