YOU CAN WIN BETWEEN

Many players have asked me "What is the fastest way to win CASH in the Pick-3 game?" The answer to that question has been the same for almost 20 years: it's THE 3-DAY CASH PLAY System. For thousands of players around the country, this is the "GO TO" system that they count on, time and time again, to win between $960.00 and $5,120.00 in just three days. There simply is no other system on the market that can match the proven track record of the 3 DAY CASH PLAY system.

It does not matter if you are a beginner or a seasoned player, this is the original Steve Player MONEY MAKER that produces real cash results, and it does it in just three short days!!! No matter which State's Pick-3 game you are playing, Midday or Evening draw, there simply is no other winning method that performs as well or as fast as the 3 DAY CASH PLAY. You have all read about my multiple personal LOTTO Jackpot wins, my record single day Pick-4 hits and my long strings of straight Pick-3 winners. Hitting those big prizes takes time and a bit of work. If you are looking for an easy way to win, then the 3 DAY CASH PLAY is a phenomenally effective system for quickly cashing in Pick-3 BOXED or ANY ORDER bets for all States Pick-3 Numbers games. You may be asking yourself why would Steve Player mess around with boxed numbers when he can hit them straight? Good question, and I can answer it in just three words: CASH, CASH, CASH!!!

Let's face it, hitting straight or exact order Pick-3 numbers is not an easy proposition. In fact, statistics from games around the country show that the BOXED or ANY ORDER bet is the most popular among players. While the odds of winning this type of bet are much better, the returns have always been much smaller. NOT ANY MORE! The 3 DAY CASH PLAY system shows you how to SUPER-CHARGE this game and collect serious money on BOXED or ANY ORDER wagers. I personally won a total of $4,323.00 in just three days and I have the winning tickets to prove it. I created this amazing system to put winnings like this within every players reach, and you don't have to be a rocket scientist to figure it out. Anyone who has ever played the Pick-3 game can put this system to work in their States game and see the same amazing results as I did in only three winning days of play.

When this system was first introduced in 2001, I announced that I would use it for exactly 3 days, in three different States, to prove just how effective it could be. I played this system using my own money in the New York, New Hampshire and Massachusetts games on October 3rd, 4th and 5th. My total investment averaged only $40.00 in each State to buy the tickets, and during the three day play period, I cashed in a total of $4,323.00 in winning tickets. This amazing three day winning run gained a lot of national publicity, and I did it to make three very important points: 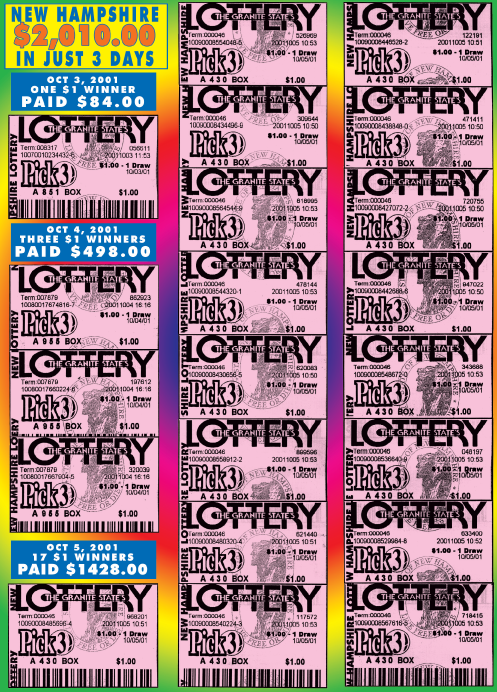 You may be asking yourself why the amount of my total winnings was so much different in each State if I was using the same system. That's a great question! The three State games that I played all have different prize amounts. New York pays either $80.00 or $160.00 for a $1.00 box bet. New Hampshire pays either $84.00 or $166.00, while Massachusetts can pay anywhere from $50.00 to $300.00 for a box bet. The other determining factor is the actual winning number that is drawn each night. If the number drawn is a No-Match (three different digits like 123), then the payoff is lower. If the number drawn is a Double (two digits the same like 112), then the payoff is higher.

In the New York game we saw No-Match numbers drawn on all three nights that I played. Because of this, the most money I could possibly win with the 3-DAY-CASH-PLAY system during these three days was $960.00, which is exactly what I won. Had the number drawn on the third day been a Double, I would have won a total of $1,600.00. Had all three numbers drawn on October 3rd, 4th and 5th been Doubles, then I would have won a total of $5,120.00 in the New York game alone. In the New Hampshire game there was one Double drawn during the three days I played, and because of this, my total cash winnings for the three days were $2,010.00; more than twice what I won in the N.Y. game.

Since the $80.00 to $160.00 payoff in the New York game is the most common structure used in games around the country, most players can expect to win between $960.00 and $5,120.00 for three hits in any three day period!!! That, my friends, is a very respectable return for a total investment of only $40.00! It may not be a Million Dollar Jackpot, but it's EASY MONEY, and I don't know anyone who would have any complaints about winning a few thousand dollars in only three days. More importantly, you can use this system again and again to keep winning. The profit potential is truly amazing. Imagine if you played and won for just three days in a row each week for a year. With potential winnings of between $960.00 and $5,120.00 for each three-day run, you are talking about cashing in between $49,920.00 and $266,240.00 in winning tickets in just one year. And remember, we are talking about Pick-3 boxed winning tickets, the kind you can turn in for CASH right at the Lottery ticket terminal!!!

The 3-DAY-CASH-PLAY system is not only one of the most effective winning methods ever released to the public, but it is also very simple to use. You can actually start playing on the very first day you receive it. I put a lot of time and energy into creating this system for all of my Pick-3 playing friends out there, and the feedback I have received from players all around the country since 2001 tells me just how much everyone loves winning with the 3 DAY CASH PLAY.

If you are looking for a fast and effective way to win your States Pick-3 game, then I urge you to order the complete system right now for only $195.00. It's a fantastic system at a great price, and it really does work! Not only do I still use this system when I play, but there are over 1,000 satisfied customers all around the country who have seen the power of this winning system first hand. If you are ready to join them and make this your own "GO TO" winning system, then order your copy of the 3 DAY CASH PLAY system today!!!