I am pleased to announce a brand new Pick-3 and Pick-4 system that is going to make a lot of people very happy. While the majority of my numbers systems introduced over the last few years have dealt with compound investment for giant returns over the long term, the new Powercube-3 and Powercube-4 systems are designed to do just the opposite. Here is a system that picks straight Pick-3 and Pick-4 numbers for you, based on past results, for fast short term results. I have received many letters from customers who want a simple and straightforward system that works. A way to pick winning numbers in straight form, quickly and easily. Here it is!!! One of my most popular systems are the Hitwheels. You simply look up the number drawn last night and you get a new number to play for tonight. Simple. However, the Hitwheels only work for boxed numbers. There is a big difference between cashing in an $80.00 winning ticket and a big $500.00 winning ticket. My new Powercubes can give you the $500 winning tickets. And in the case of the Pick-4 game, the really huge $5,000 winning tickets. 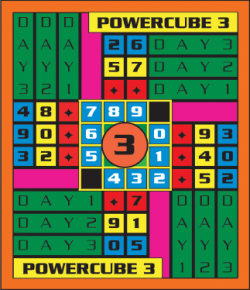 How do they work? There are 30 Powercubes for the Pick-3 game and 30 for the Pick-4 game. All you need are the results of the last three drawings in your state’s game. The number drawn last night tells you which Powercubes to use, and you simply look up each of the three digits drawn. The Powercube then tells you which digits to play for the upcoming drawing. Finally, you use the Powercube Converter to turn these new digits into 9 straight Pick-3 numbers to play for tonight's drawing. If you win, go to your local Lottery agent and cash in your tickets. If not, repeat the process the following night; your first of many straight hits will not be very far away!

The Pick-4 Powercube system works the same way. Simply look up the last three numbers drawn in your state’s game and convert them to the new numbers you will be playing for tonight's drawing. Now for the big question: Why do they work? Deep within the geometric design and mathematical formulation of the Powercubes lies a very complex theorem developed by analyzing every single Pick-3 and Pick-4 numbers game outcome that has ever taken place in this country. We know what the ideal outcome of a perfect game should look like, but the actual outcome is usually somewhat different. This is called a variance, and what I have done is created a mirror image of this variance that picks future numbers based on already established patterns. It is not necessary to understand this theorem; it's just an explanation of why the Powercubes are much more than just fancy black boxes and numbers. What really matters is the fact that the POWERCUBES actually can pick straight winning numbers and that they're incredibly easy to use.

The entire process takes less than five minutes and gives you the most accurate Pick-3 and Pick-4 selections available on a daily basis. You can win as you go, collecting $500.00 or $5,000.00 (Pick-4) for each hit, or you can use these selections with a progressive wheeling system for compound returns. And as with all of my new systems, the Pick-3 and Pick-4 POWERCUBES come with Progressive Wagering Insurance, which allows you to protect your entire wagering investment in the event of a dry spell.

If you have been waiting for a new super powerful no nonsense approach to playing Pick-3 and Pick-4 numbers in straight form; an easy to use system that produces consistent winners, then wait no longer. The full set of 30 Powercubes for your Pick-3 or Pick-4 game are available for $75.00 each. Or, save $25.00 by ordering both sets for only $125.00. This system is simple to use, it produces high paying straight hits and it is very affordable. It can also be used in conjunction with many other systems, even the high powered progressive systems like Cashmax. For example, if you were to play the nine numbers selected by these amazing Pick-3 Powercubes each day, plus one straight selection of your own, and you had one hit every 30 days (300 bets), then the combination of Cashmax and Powercubes would show you a minimum profit of $123,000.00 in less than 12 months.