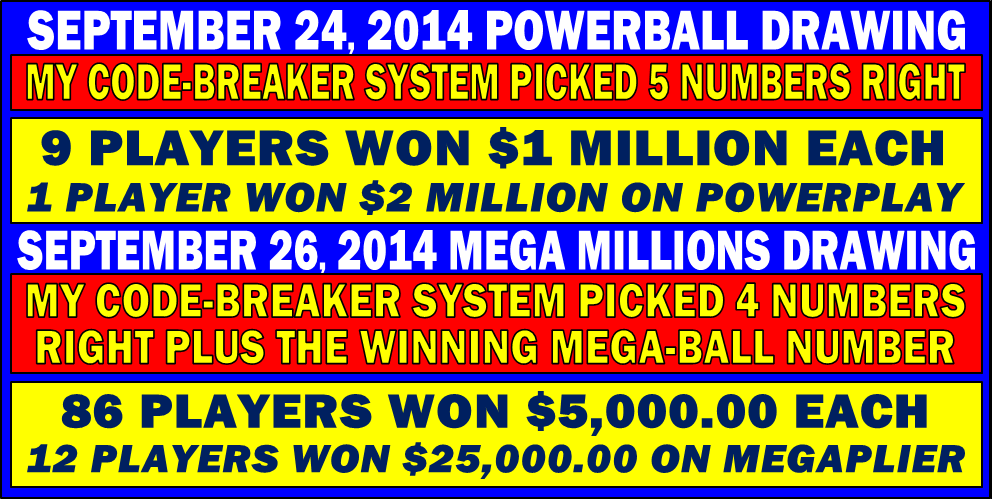 All the votes are finally in and it looks like a landslide victory!!! Our system testers around the country unanimously agree that my brand new CODE-BREAKER system for the Powerball and Mega MIllions games is a huge winner. Just take one look at the results shown above and I think you too will agree, but best of all, this simple, affordable and highly effective winning system is now ready for immediate National release!!!

Let me begin by making a few things perfectly clear. First, this amazing new Lottery system DOES NOT require you to choose your own numbers. Second, there are NO charts to fill out and NO colored pens required, and third, you can win a Million Dollars or more while playing only 14 total combinations!!! Not only does the Code-Breaker system give you proven winning ready-to-play five number combinations for both the Powerball and Mega Millions games, but it also gives you the exact Powerball or Mega Ball number to play along with your five number combinations!!! There is nothing to figure out and no numbers to choose. Just play the numbers and smile!!!

Using the Code-Breaker system is as easy as filling the results of the last twelve drawings into a simple worksheet. There is no gray area here. If 20 players in different States all use this system at the same time, every one of them will get the same exact winning numbers to play. 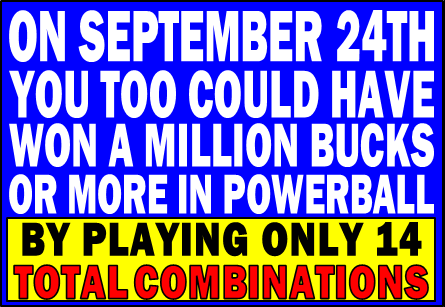 Just two days later, the Code-Breaker system hit paydirt again by listing four winning numbers plus the winning Mega Ball number for the September 26th Mega Millions drawing. I think that the results speak for themselves. There were a total of 98 players who cashed in on the four number plus the Mega Ball prize level. That, my friends, is once again well above the expected number of winners. There were 86 players that each won $5,000.00 and 12 players who used the Megaplier option to win $25,000.00 each. Need more proof? If you do the workout for the September 26th Mega Millions game using the results of the previous 12 drawings, you too will see that the Code-Breaker system gave you four winning numbers plus the Mega Ball number on the same line. And these are ready-to-play combinations - just copy them onto a betslip and play.

Now that you have seen firsthand the amazing results the Code-Breaker system is capable of, you probably want to know how this is possible. Well, my friends, I am glad you asked, because there is nothing I would rather do than talk about Lottery systems!!! The Code-Breaker system is based entirely on what the name implies: BREAKING THE CODE! Here is story of how I created this system.

There are exactly 292,201,338 possible Powerball combinations. Yes, that's over 292 million possible variations of numbers. Consequently, there are exactly 258,890,850 possible combinations of numbers in the Mega Millions game. Last Winter I created a random number generation program that gave me exactly 100 million drawing results for each game. I then used my new Robin Hood super computer to analyze these results. The computer looked for patterns and trends and then categorized its findings. No big deal so far, as this random sampling only represented a fraction of the possible numbers that could be drawn in either game. Once I fine tuned the computer program to the point where it was actually learning from its findings, I then repeated this process 100,000 times for each game. Yes, the computer ran for several weeks, crunching the data and learning along the way. In total, this exercise allowed me to analyze 100 BILLION possible outcomes in each game, and boy did I learn a lot. Actually, it was the Robin Hood computer that did all of the learning. I simply took all of our findings and turned them into the winning Code-Breaker system. And what a winner it turned out to be!

You may believe that analyzing random outcomes serves no purpose at all. The truth is that the results of the actual Lottery games are all supposed to be random as well. However, as I have said many times before, there is a certain inherent order in randomness, and this order is ruled by the laws of probability. The simple fact that I had created a database of 100 Billion results for each game gave me an overview of the games that I do not think anyone else has ever before analyzed.

The rest of the process was relatively easy, at least by my standards! Once I had all of this past results information to work with, I simply constructed a unique selection system that takes advantage of my findings. The Code-Breaker system converts the past results of the actual live numbers drawn in the Powerball and Mega Millions games into ready-to-play new combinations. These combinations are based on the most likely numbers to be drawn next according to my findings. And don't forget, this is one of the few systems that gives you the most likely Powerball or Mega Ball number to play with your five number combinations. No more guessing the final number. You get the exact five number combo plus the most likely Power Ball or Mega Ball number.

But wait...IT GETS EVEN BETTER!!! What our system testers say they love the most about the Code-Breaker system, besides all of the winning numbers, is how easy it is to use. In fact, it's not only easy but it's a lot of fun as well. All you have to do is fill in the results of the last twelve drawings, do the simple workout, and you will have your new numbers to play. After each drawing, cash in your winning tickets first, and then fill in the results of the last drawing and do the easy workout again. Now you are ready for the next drawing. You are going to love the simplicity!

As a final thought, I want you to know that we have made this system very affordable so that everyone can easily use it. At only $195.00, the Code-Breaker system can show you tremendous returns for a very small investment. If you play Powerball or Mega Millions, then this is the one!