History Was Made When The Same Number Was Drawn Midday and Evening!!!

Hello to all of my Lottery friends around the country!!! I am very excited to announce a brand new system this month and I have a feeling that this is exactly what so many of you have been waiting for. It's called the PICK-3 CASHBOX and it is truly the EVERYDAY SYSTEM FOR EVERYONE. Before I tell you all about the CASHBOX and show you how it works, I would like to show you what this easy to use system can do.

I hit six winning boxed Pick-3 numbers in just eight days. The New Hampshire Lottery paid me a total of $5,000.00 for my efforts. This may not be a fortune, but keep in mind I was only playing simple Pick-3 boxed (any order) numbers.

At first I thought that this was very unusual, because the odds of the same exact number being drawn in the Midday and Evening drawings is astronomical. In fact, it has never happened before. I spent some time looking over my workout and thinking about what I should do. In the end, I decided that since this system was performing so well, I might as well listen to what it was telling me to play, so I placed another $10.00 wager on the number 112 for the Evening drawing. I watched the live drawing and had to laugh out loud when the number 112 was again drawn for the October 24th Evening drawing. Not only did the New Hampshire State Lottery make history by drawing the same number twice in the same day, I made history using my CASHBOX system to win on the same number twice in one day. The truth of the matter is that I had a lot of faith in this system and it did not let me down.

Since then, I have done a very in-depth analysis on why the same number (112) was drawn twice on October 24th, and it now makes perfect sense to me. The 112 was the most overdue number in the game for both the Midday and the Evening drawings, and the CASHBOX system knew it. With another $1,660.00 cash win for the evening drawing, my eight day winnings were exactly $5,000.00 - and again, that was for playing boxed numbers - FANTASTIC!!!

Now that you have seen first hand what the PICK-3 CASHBOX system did for me, let's talk about what it can do for you. For many years I have been trying to put together an easy to use system that EVERYONE could use EVERYDAY. Not only did the system need to be simple, but it needed to be quick, because many players just do not have the time for long complex workouts. From the results I personally experienced, I would say that I was more than just successful in my quest. This is a system for everyone who enjoys playing the Pick-3 game and would like to increase the amount of winning tickets they cash in.

The PICK-3 CASHBOX rapidly uses the past results of your game to give you the best numbers to play for the upcoming drawing. There are actually three different ways to use this system, and you can custom tailor it to your personal playing style and your wagering budget. You can start by playing simple $1.00 wagers, and then use your winnings to increase your wagers to $5.00, $10.00 or more for higher returns. This level of flexibility is one of the great features that the amazing CASHBOX system offers you.

When I first designed this winning approach for the Pick-3 games, I nicknamed it "my back pocket system." I told my friends and fellow Pick-3 enthusiasts that I could keep a copy of this system in my back pocket, travel to any state, do the workout, and have a very good chance of winning that state's Pick-3 game. There are no colored pens to play with and no lengthy formulas to learn. Just go to your local Lottery vendor, plug the past results of the game you are playing into the workout, and you will immediately see which numbers to play. In fact, I am going to take you through the steps of using one of the three CASHBOX methods right now, just so that you can see how easy it really is. 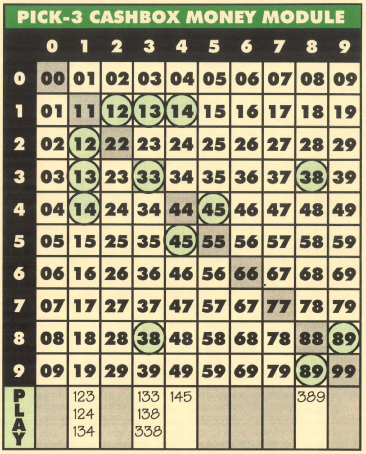 That's all there is to it. Now you simply play these eight numbers in boxed form. If any one of them is drawn, you are a winner. You can also use the CASHBOX TRACKER to reduce these eight numbers to just one or two numbers and play them for $5.00 or $10.00 each. Again, there is a great deal of flexibility offered by the PICK-3 CASHBOX system that lets you tailor it to your own playing style and wagering budget. The bottom line is, the numbers that the CASHBOX system gives you have a very high degree of success, because they are numbers that are the most overdue in any game. Everyone knows that the more overdue a Pick-3 boxed number is, the more likely it is that the number will be drawn. Remember the number 112 that I won on twice in one day. The simple fact of the matter was that this number was extremely overdue in both the Midday and Evening games. The fact that the number 112 was so overdue is why it was drawn twice, and the fact that the CASHBOX system immediately spotted it is why I won on both drawings with the same number.

You do not have to be an expert player to use this system. Remember, it was designed to be an easy-to-use EVERYDAY SYSTEM FOR EVERYONE. The instructions for this system take only a few minutes to read and to understand. Once you know how it works, you will be using my READY-TO-PLAY winning Pick-3 numbers to cash in on your state's PICK-3 game in no time at all. Playing is fun, but winning cash is even more fun.

When someone uses one of my systems to win their game, then we both win. The player wins by cashing in his tickets and I win because I was the one who showed him or her how to do it. I have devoted my life to developing winning systems and showing players around the world how to win cash in their Lottery games. By doing this, I have amassed a sizable following of happy customers who know that when it comes to winning numbers, my systems come through time and time again.

With the release of the PICK-3 CASHBOX system, I already know that it will quickly become one of my best selling titles of all time. The system is that good, and most importantly, the system is that easy. This is the "back pocket system" that I have been wanting to publish for a long time, and I am very proud that it is finally ready for everyone to try. How much will you win? That depends on how often you play it and how much you wager. Start slow at first, and once you see the power of the CASHBOX, use your winnings to double up your wagers. The more you win, the more you can wager, and the more you wager, the more you can win. That's pretty simple math from where I sit, and with the way the economy is putting the squeeze on everyone right now, it's the kind of math we can all use to brighten our Holidays. I urge you to try the PICK-3 CASHBOX system in your state's game today. Your winning numbers are waiting!!! 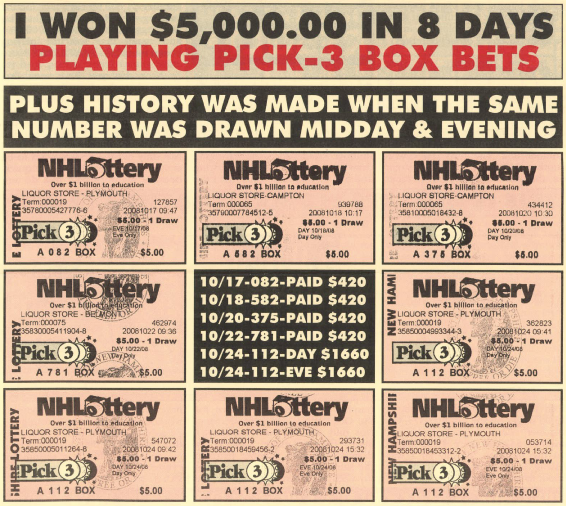